MAJID JORDAN’s performance reminds us of boy bands in the ‘90s. There’s no synchronized choreography, or cheesy harmonizing, but there are hordes of screaming, wanton women in the audience, and the duo seemingly can’t get enough. The duo feed off of the feminine energy, and Majid especially so, as he gyrated on stage with longing looks, that every audience member thought was to them. The entire OVO brand seems to be based off of catering to a female audience, and it keeps the fans coming back in droves, every time they’re in town to perform

Majid Al Maskati is a Bahrain born and raised singer/songwriter who moved to Toronto to pursue a business degree. A chance meeting with Jordan Ullman at a bar during Majid’s 21st birthday party, led to them working on music, as a duo under the name Good People. After renaming their act Majid Jordan, they began releasing their synth heavy, downtempo R&B, which caught the ears of producer Noah Shebib. Majid’s vocals sounded ethereal on Drake’s Hold On We’re Going Home off of his Nothing Was The Same EP. It was a breakout track for both Majid and Jordan and fast tracked them to releasing their own music under Drake’s OVO label.

Jordan Ullman is a Toronto born and bred producer extraordinaire, and one half of Majid Jordan. He’s responsible for the moody sound that has become a signature for the duo, and he was creating for Drake since he was a teenager. Jordan is a classically trained pianist and as he stood up on this futuristic, star-trek looking platform that housed his keyboard, he stood with all the confidence of a maestro.

With the release of their self- titled debut album this year, Jordan and Majid are stepping out from the OVO shadow, and crafting their own vibes.

Tune in to Episode 38 of TSG:OA for a recap of Majid Jordan’s show at the Commodore Ballroom.

This is the age of the SoundCloud rapper, where uploading a track to the internet, can bring you the same clout as being signed. One of the most famous acts to blow up off of the platform is POST MALONE, whose breakout hit White Iverson in 2014, was an anthem for people on the come up. Moves since have been colossal, with a feature on Kanye West’s Life of Pablo, and opening for Justin Bieber in stadiums across North America. We caught his performance in Vancouver, and he was decidedly more sweet natured, than his music suggests. 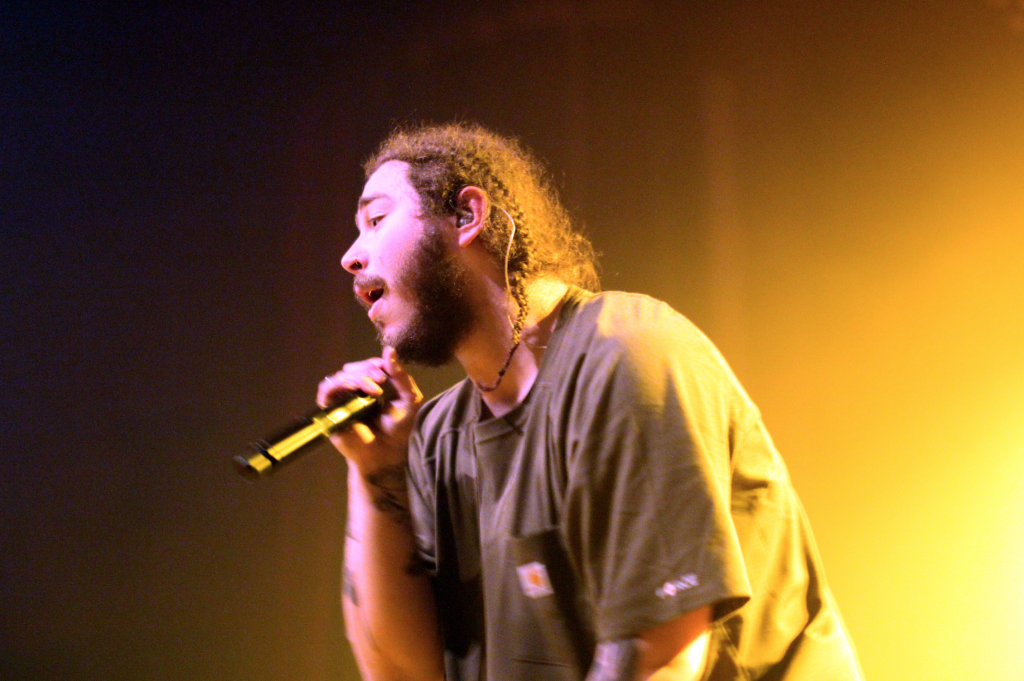 Post Malone strode onstage, dressed in an oversized, down to his knees t-shirt, hair in braids and a gold grill in his mouth His whole persona is a throwback to Southern rappers at the start of the millennium. Before he started the beginning few lines of White Iverson, he gave the first of many, big, wide, cheesy smiles. The audience often mimics the artist, and the crowd was filled with white boys in braids, which is somewhat uncomfortable, as cries of appropriation are never far, when it comes to white rappers. Post held his own, as White Iverson was played twice, both to raucous applause and cheers, and he just seemed to be having such a good time up on stage, it was a contagious feeling. 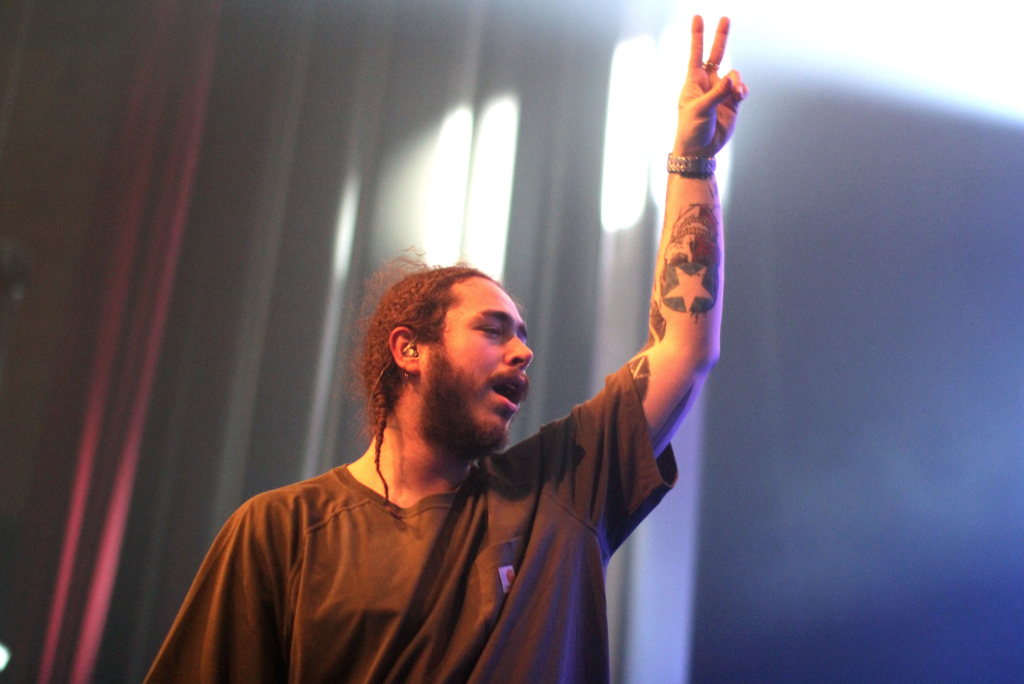 Post Malone is gearing up to release his first album, the aptly titled STONEY, on December 9th. With features from Justin Bieber, Kehlani, 2Chainz and Quavo, the album has some sturdy star power, which isn’t necessarily seen on too many debut efforts. Post has shown that he’s far beyond conventionality. This album will either propel him past the “one hit wonder” stage, or keep him trapped there until he can prove himself. Whatever the outcome, Post is out there, connecting with fans and having a good time doing so, if his performance in Vancouver is any indication.

“I’m nice but not that nice” is what Lil Debbie told the crowd in a packed club, after a man attempted to hurl a drink at her onstage. It was disappointing to witness, especially since nothing of the sort had happened at any of the other shows we’ve been to. For Debbie though, it seemed to be just another day in the life as she moved back into the music quickly, after reprimanding the offender.

A rap show is a testosterone filled environment. The whole setup, from the expletive laced performances by artists and hype-men, to the girls they bring up on stage to dance – it’s catered for a male experience. It’s been the nature of rap, one of the most male dominated genres from its inception, with women only participating on a bigger platform in recent years.

Lil Debbie’s fought to turn the tides of this seminal boys club since she first picked up a mic. Her career has seen her persevere despite routine backlash which first started when she left the White Girl Mob and continues today with online torment just because she’s a female with bars. The constant barrage of negativity she’s waded through in the last few years seems to have amplified her stamina.

Debbie is strong; her presence is felt even before she speaks a word on stage. She commands attention, demands that you listen to her and engage with her. She speaks often, going on a trail of F-bombs capped off with a sweet smile.

She yells, she smokes, she stops songs to encourage you to follow your dreams.

“Nice, but not that nice” needs to be the maxim of every woman in the music industry, and every woman period. Knowing yourself and your boundaries may not make you easily marketable to record labels, but it adds years of longevity to your career, because adhering to your persona and refusing to be pushed around is authentic. That authenticity is craved by music audiences, who can see far past the manufactured bullshit, which is why Lil Debbie is in high demand by her audience even though ratchet/hyphy music has simmered recently.

We sat down with Lil Debbie before this show and spoke with her about competition and camaraderie. 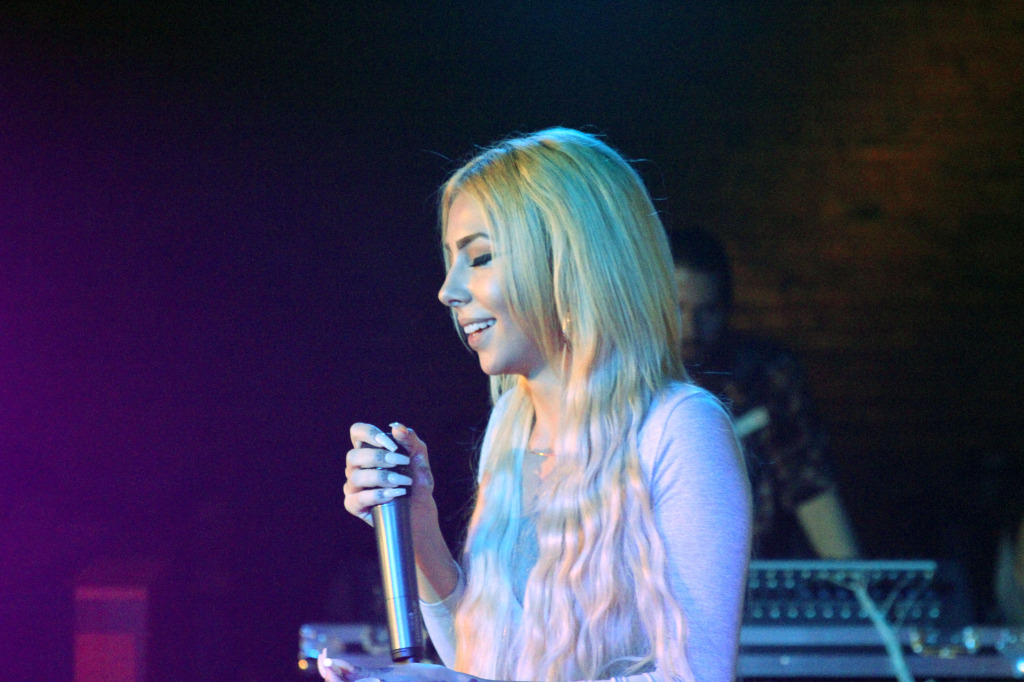 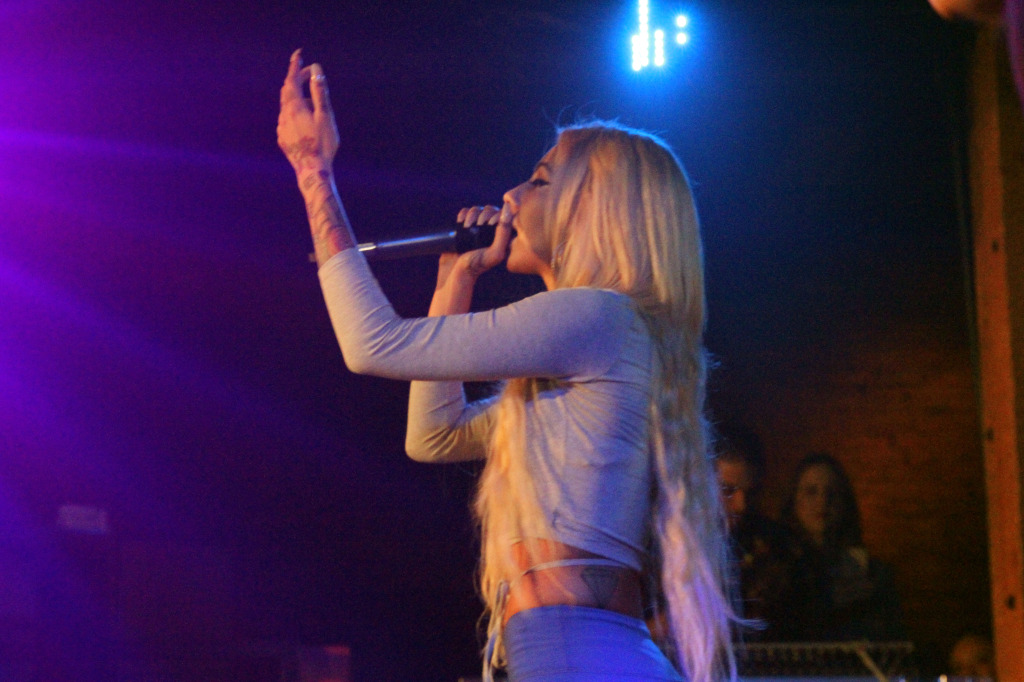 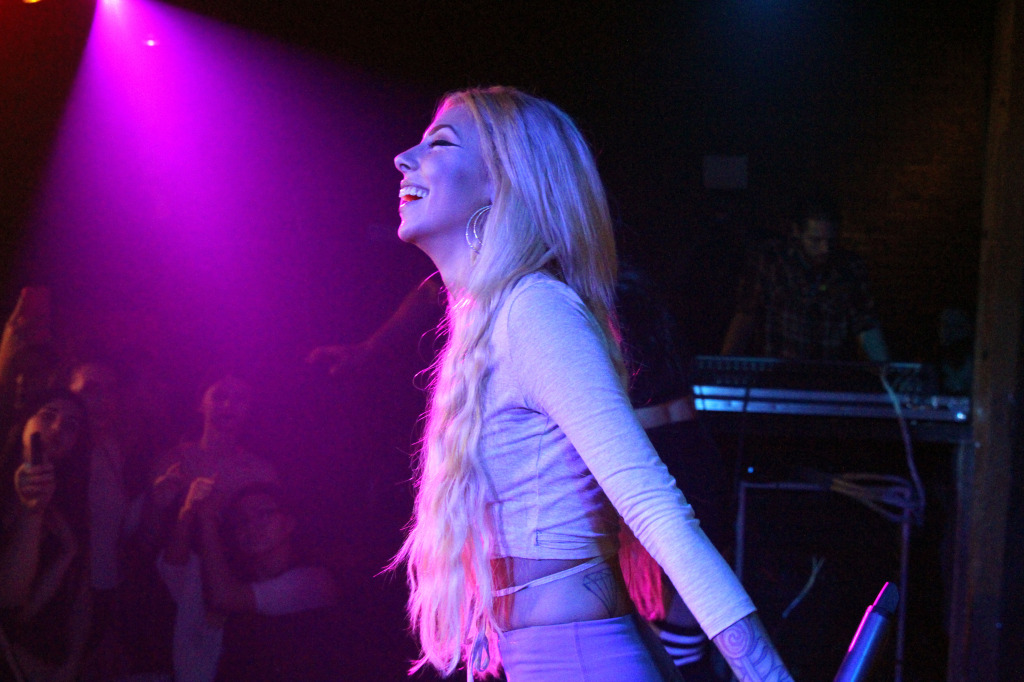 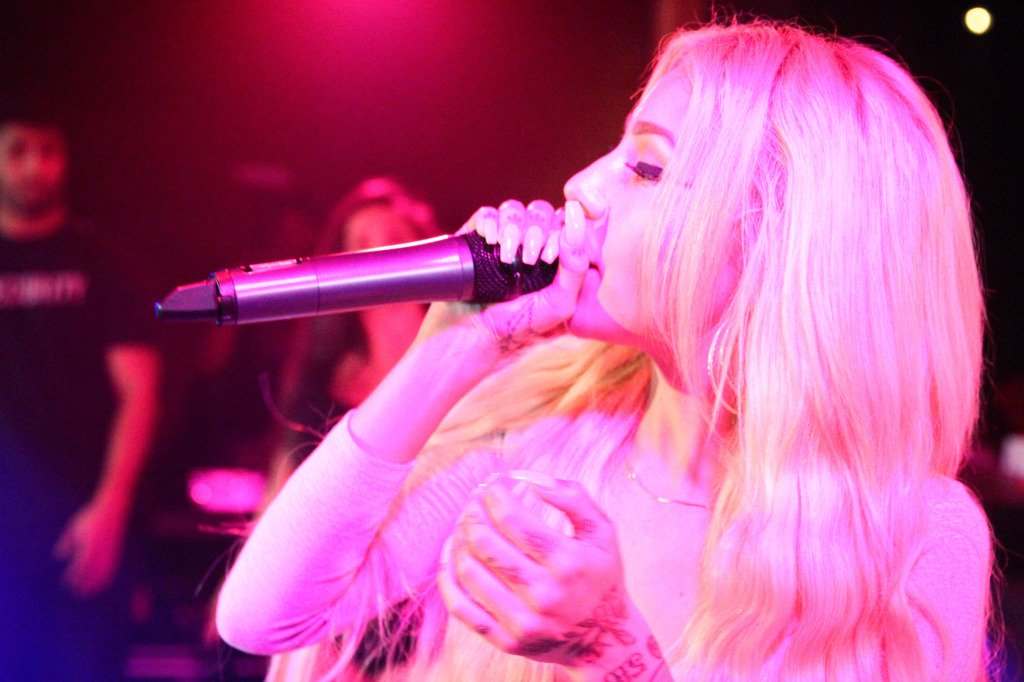 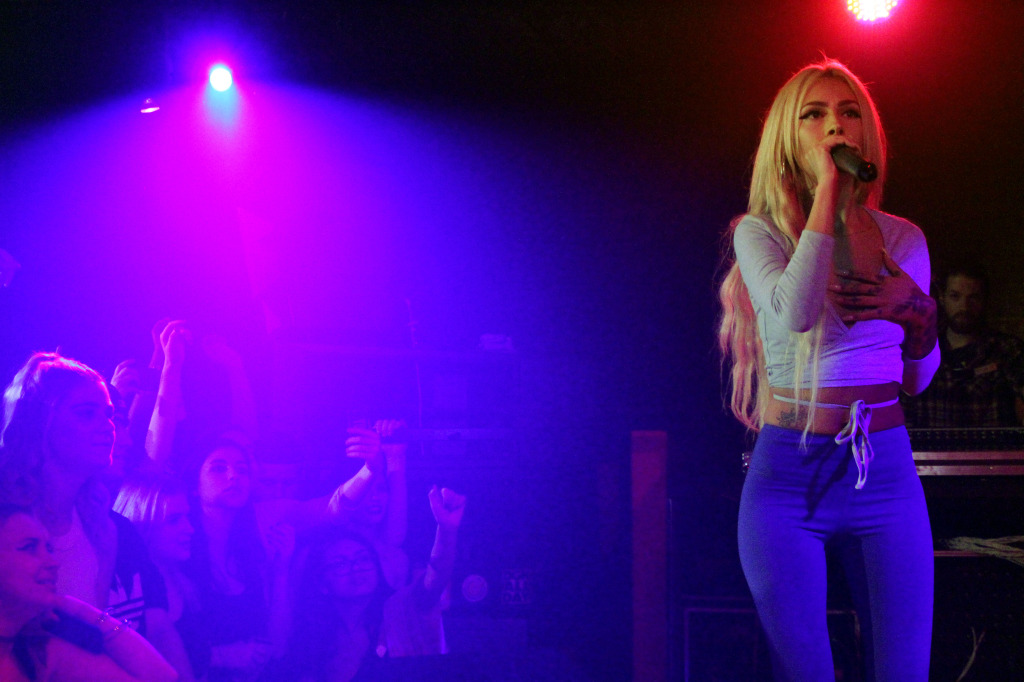 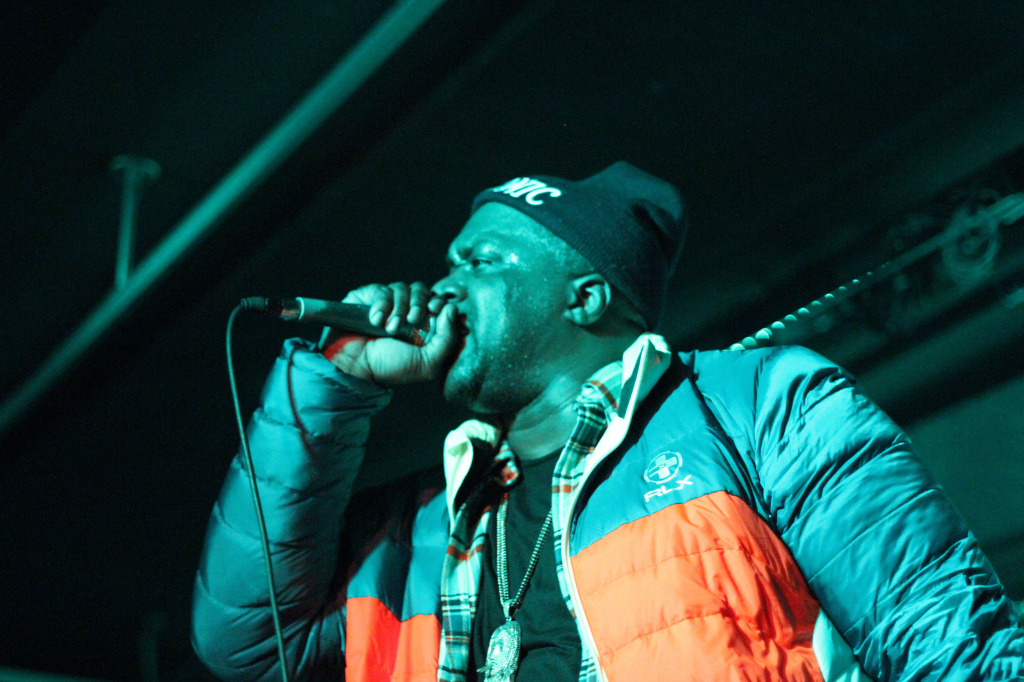 Smoke DZA has been typified as the quintessential East Coast stoner rapper since Substance Abuse his first mixtape. The Harlem born and based rapper has released many sinsemilla inspired songs since then, earning him his “Kushed God” moniker. Even though, he possesses an intimate knowledge of the plant, boxing Smoke in as a “weed rapper” is  unfair. Yes, Smoke has waxed poetic about the herb on more than just a few bars. But, the second part of his name (DZA) stands for “Dream, Zone, Achieve” and that’s more befitting of his aspirations for his music.

He’s from a down-and-out area of Harlem, and carries that unmistakable confidence with him, in his raps and on stage. He stays true to the Harlem in him, more bodega than bougie. His rapping style is not confrontational by any means. He’s got a relaxed flow that may (or may not) have something to do with the steady stream of THC flowing through him. He’s become a go to for features, collaborating with almost every new school rapper that matters. From A$AP Rocky to Schoolboy Q, he’s built alliances with artists on both coasts. His fan base is international, and they are viciously loyal to him. Check any music site’s comment section after they release a “best rapper” list and you’ll find his fans screaming bloody murder for looking him over. He’s a perpetual underdog, despite being one of the best performing rappers of recent in both critical and commercial capacities.

What endears his fans to DZA seems to be his willingness to delve into the problems of his community without being patronizing or over opinionated. He’s more of an orator, sharing stories about the hardships and good times he’s gone through while trying to make it as a person and as an artist. His show was an ode to the depth of Smoke Dza as he weaved in advice for the audience and shared stories about how he’d been working his whole life to be on that stage. Dream, Zone, Achieve – it was the theme of the night and the mantra for his life. 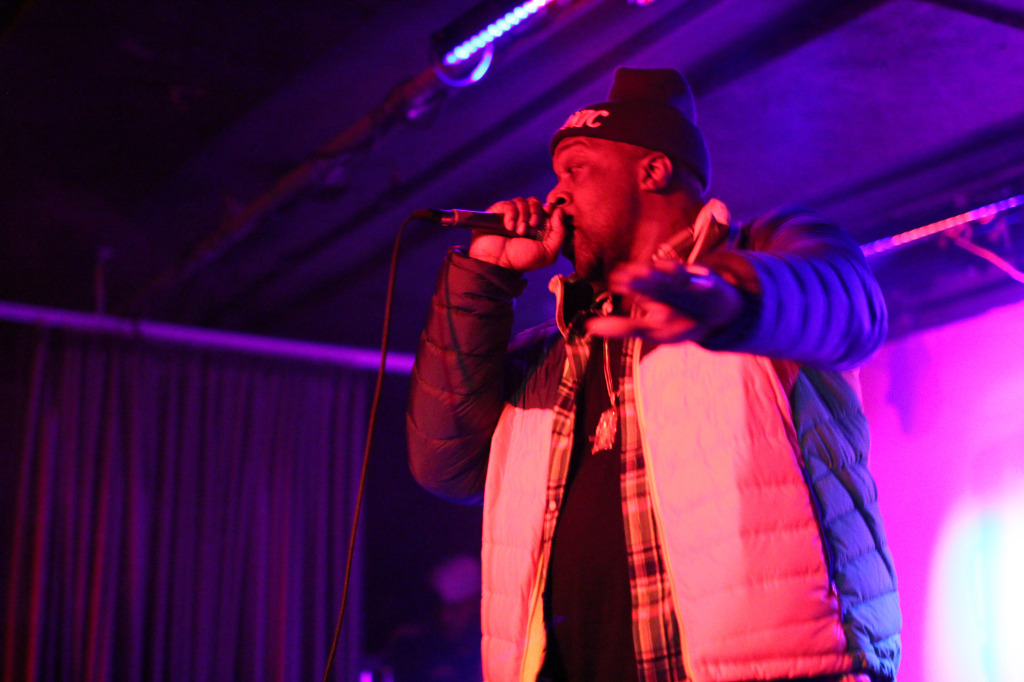 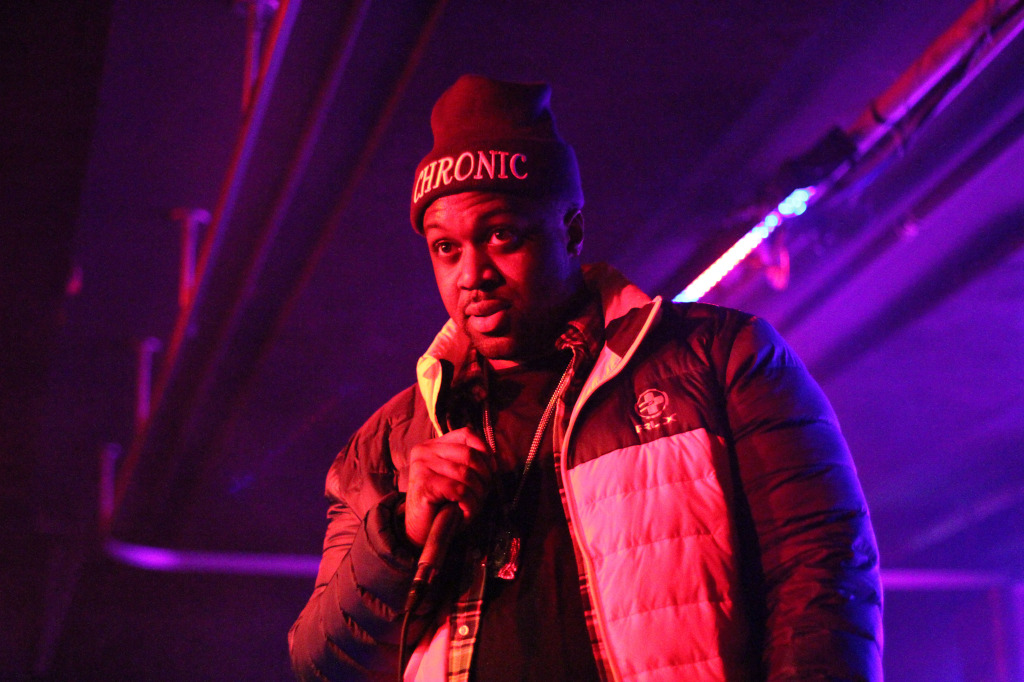 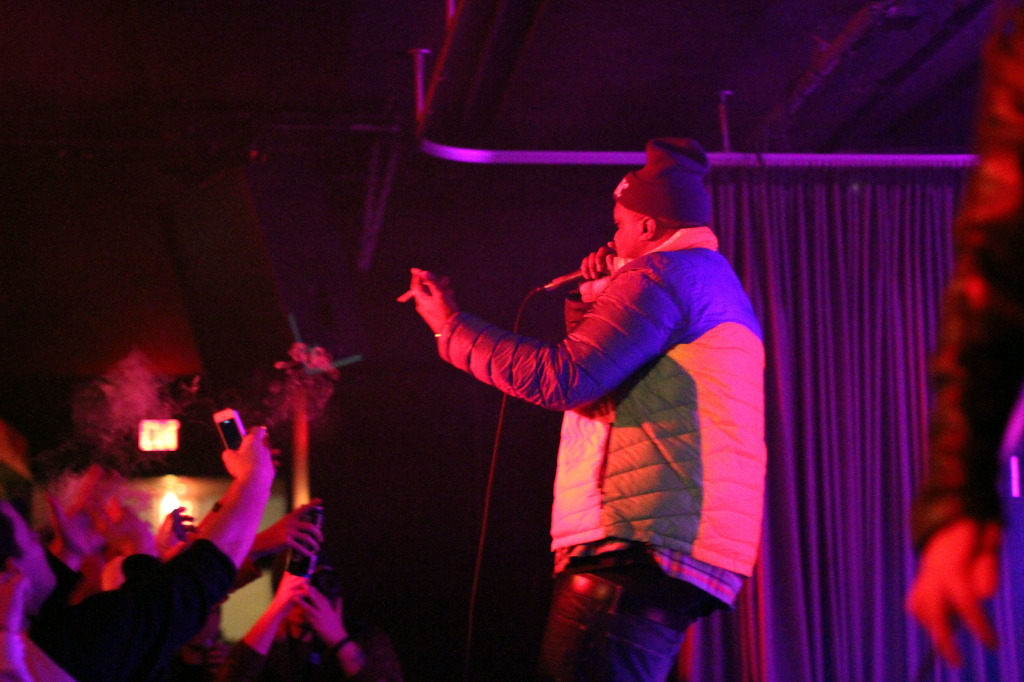 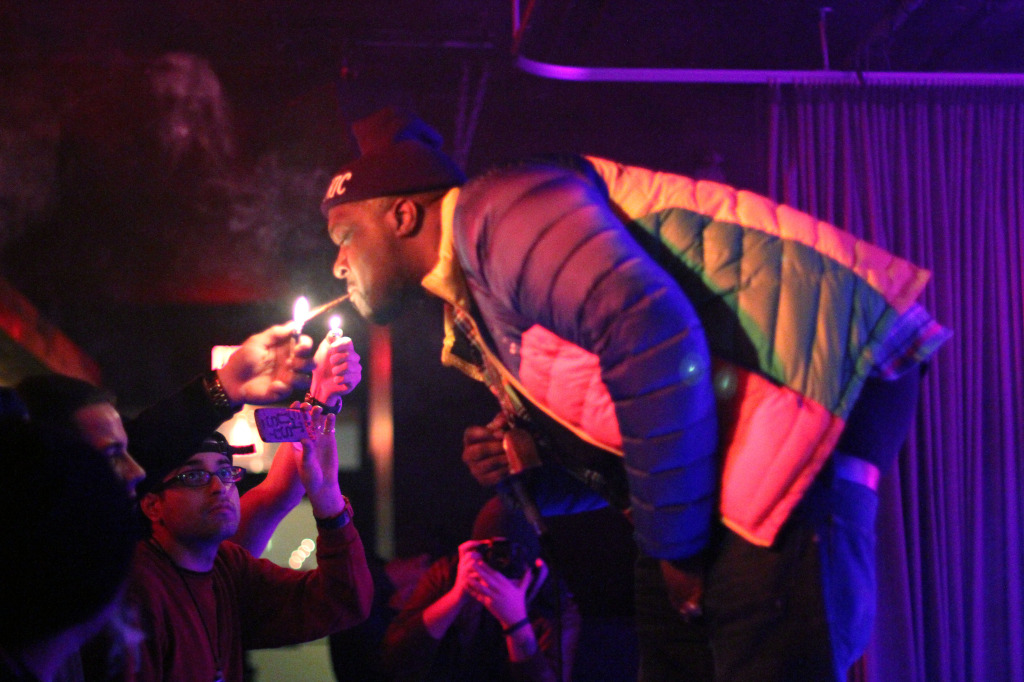 Yung Lean has come a long way from his beginnings in a Stockholm suburb. He’s toured North America extensively over the last year and a half, playing sold out shows across the continent. When you look at his counterparts, you realize that he doesn’t seem to have any. Yung Lean exists in a vacuum; he’s not competing with American rappers, or anything that the industry has been putting out in the last few years. He’s created an ultra-niche for himself, and his age, his ethnicity and the subject matter in his rhymes are all markers that uniquely identify him. He’s a synonym for mellow, with everything about him, from his style, to his music, to his calm demeanour indicating that he’s far removed from the lavishness that is often glorified in rap.

Yung Lean, born Jonatan Leandoer Håstad, is one of the most successful examples of an internet rapper. In the last decade, the ability for artists to make money from their music online has quantified significantly. In the past, the internet (well, Myspace) was a place to drum up buzz, to get people behind your music in the hopes of catching the ear of an A&R. That’s become less important as platforms such as Bandcamp and YouTube allow for music to be sold independently. This has, to an extent, led to an over saturation of the market, with everyone and their mother peddling their Soundcloud link on Twitter. But, if you’re able to crack social media, and YouTube, and put out decent music, it’s more possible than ever to make it financially, without ever having a song hit radio airwaves.

For Yung Lean, his success may seem instantaneous. He’s been “famous” since he was in his early teens (he’s eighteen now) but the road to crossover to North America must have been grueling. He’s making the most of his time by touring in support of his album Unknown Memory, which he dropped in September. He’s got his collective, Sad Boys, which consists of longtime friends Yung Sherman and Yung Gud. They’re unofficially joined by the thousands of young, err yung fans that are collectors of Yung Lean and his lifestyle.

For Sad Boys, there’s nothing foreign about performing in front of thousands of fans. They were at ease the entire time they were on stage, comfortably moving along to the music, which was echoed back by the visibly buzzed up crowd. We could go into the drug culture that Yung Lean’s music promotes, one that quite a few of his young supporters partake in, but that wouldn’t be fair to him, as he’s hardly the first or last to perpetuate that sort of lifestyle. Whether helped along by chemicals or not, Yung Lean’s army of sad boys and girls were thoroughly entertained.