The Underachiever’s released It Happened in Flatbush this year, and they’re heavy on the tour circuit in support of the EP. Issa Gold and AK the Savior have adopted a breezier, more laid back sound since moving to LA last year. They took to the Green stage (Scene Verte) on the first night, and were joined by producer Powers Pleasant, who DJ’d their set. The trio took to the stage shortly after 8:00 p.m. and by then temperatures had cooled, and the evening party of Osheaga was just beginning. 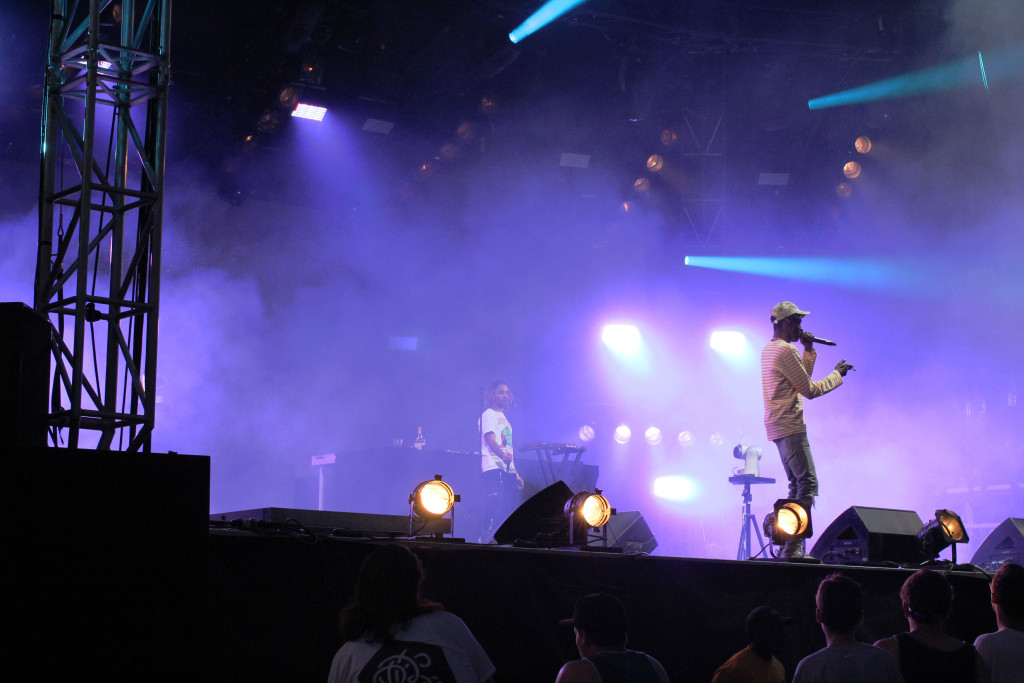 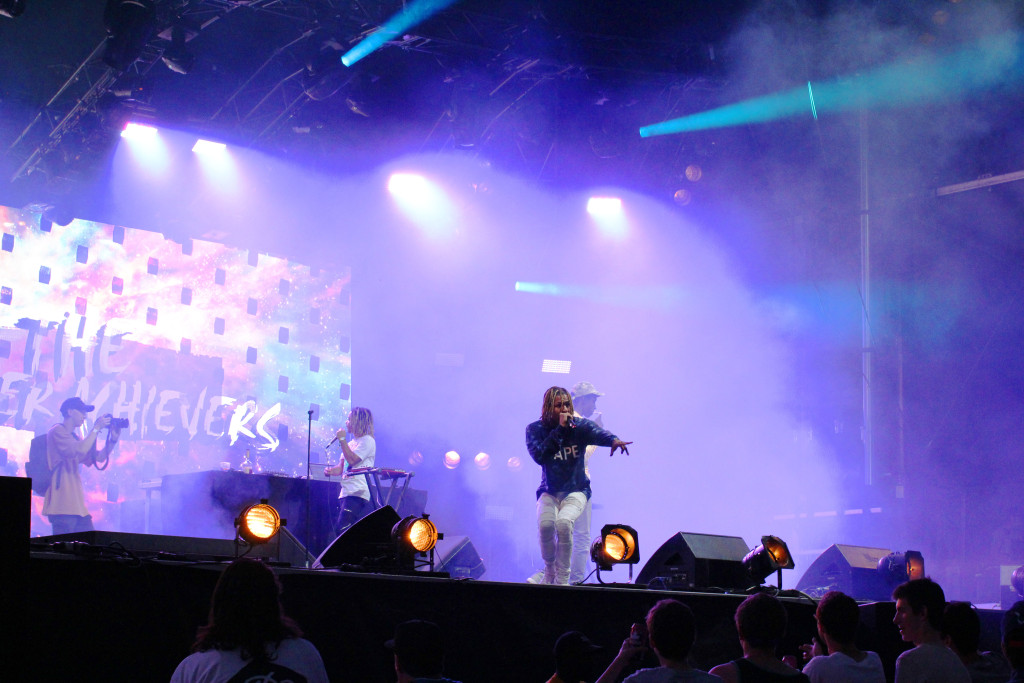 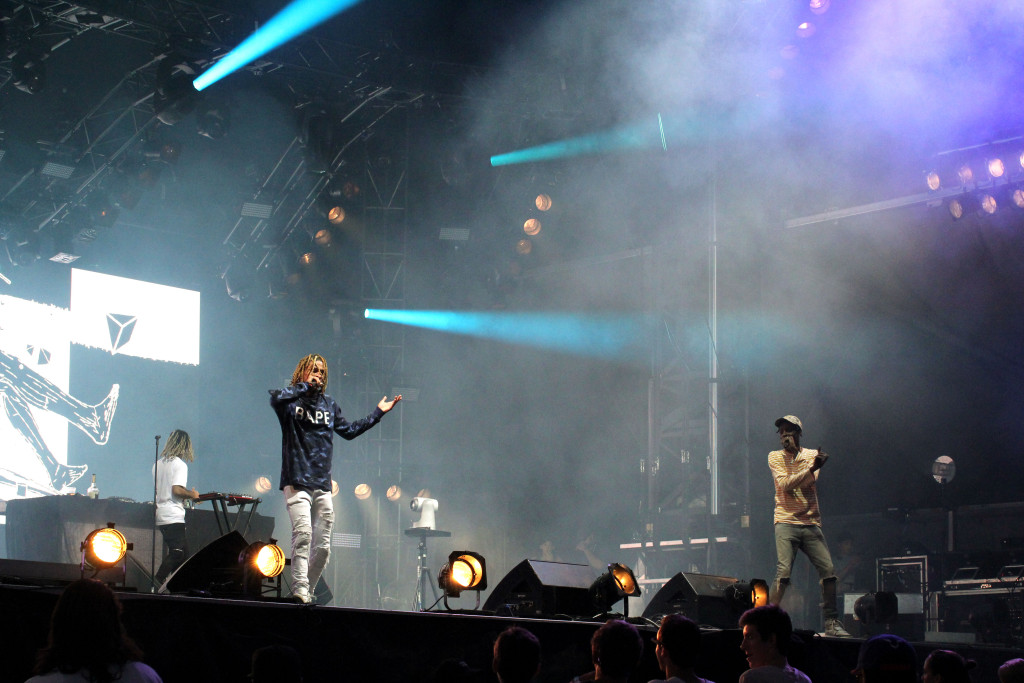 The duo both released side projects in 2014, but they’ve reunited once again for It Happened in Flatbush and they favoured tracks from that album, but also delved into older material. 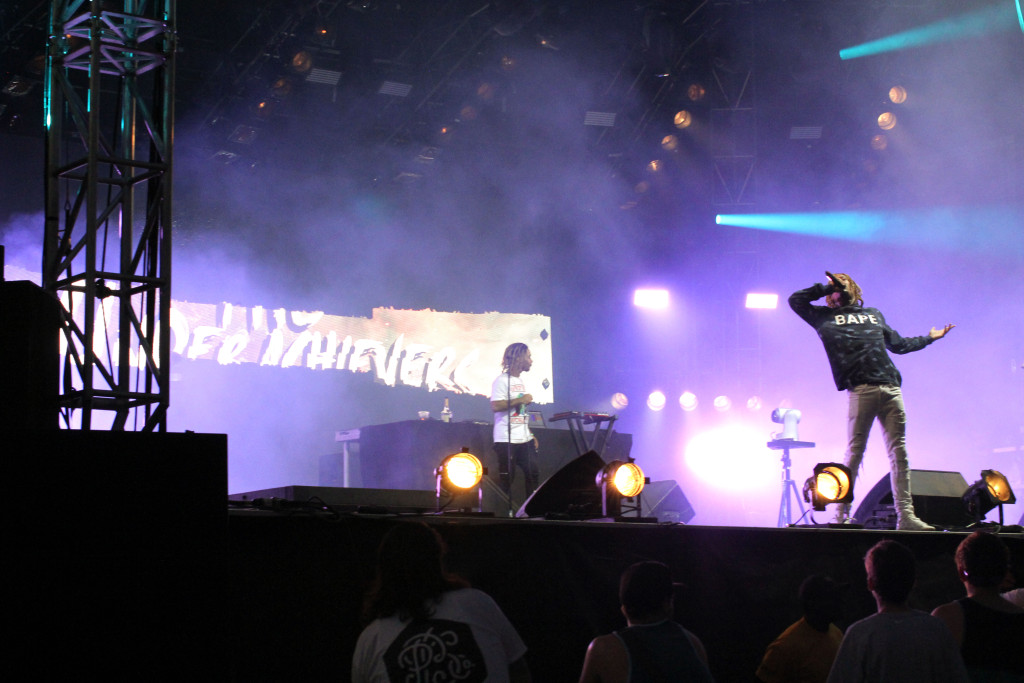 Everything about AK the Savior screams Rockstar. 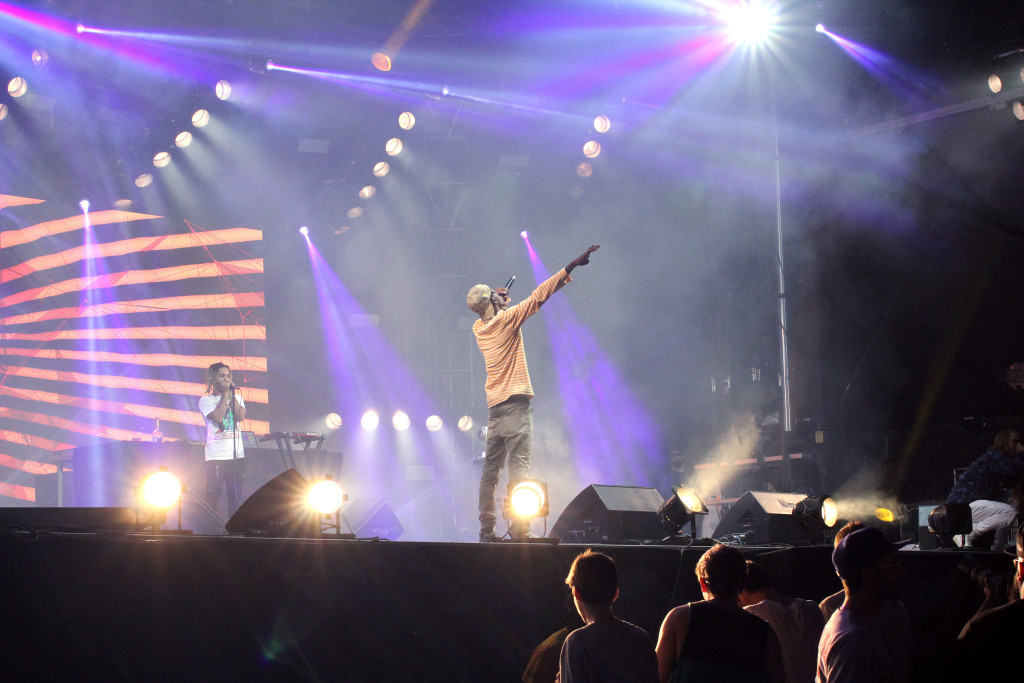 Powers Pleasant held down the show as Issa rapped his verses. 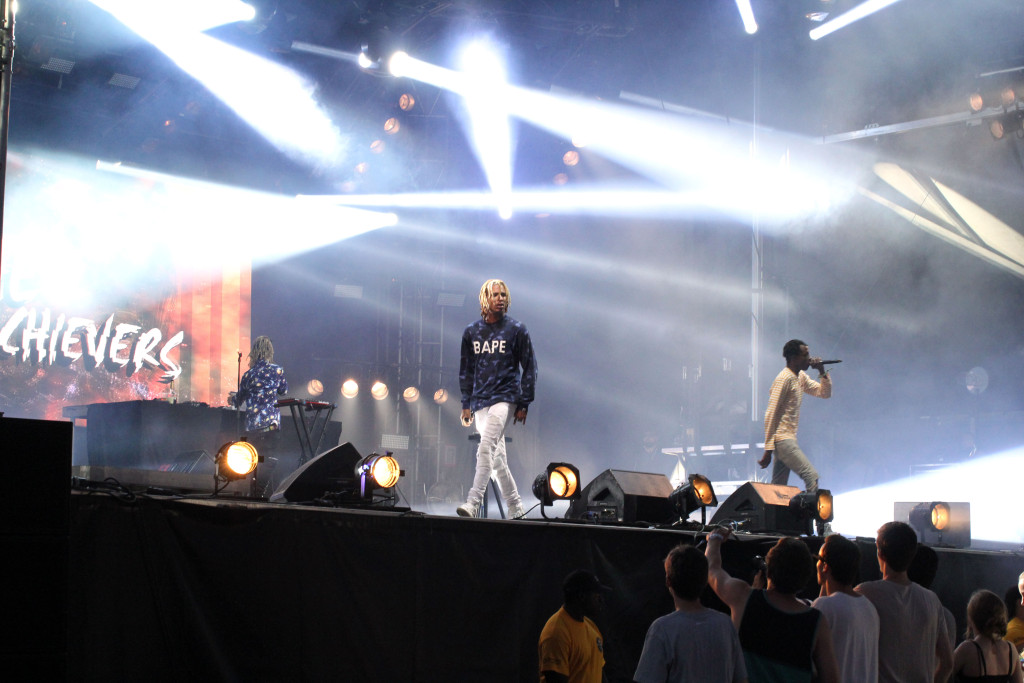 The duo are known for their fast rhyming over hard bass, and their flair. 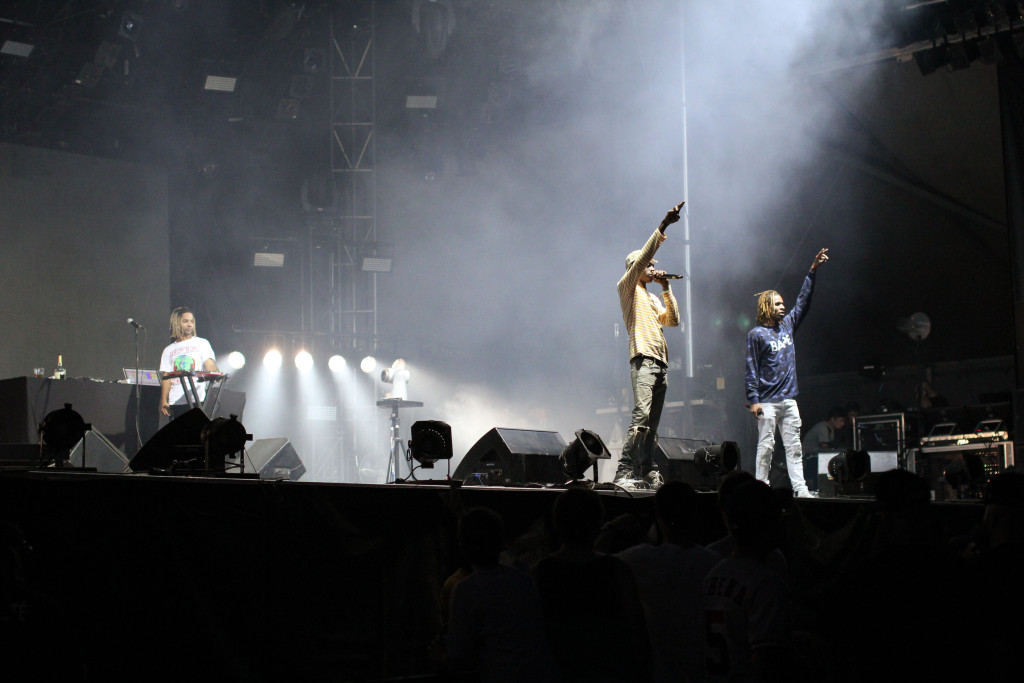 The final song of the night was chosen by the audience, and the crowd chose Herb Shuttles to end off their set at Osheaga. 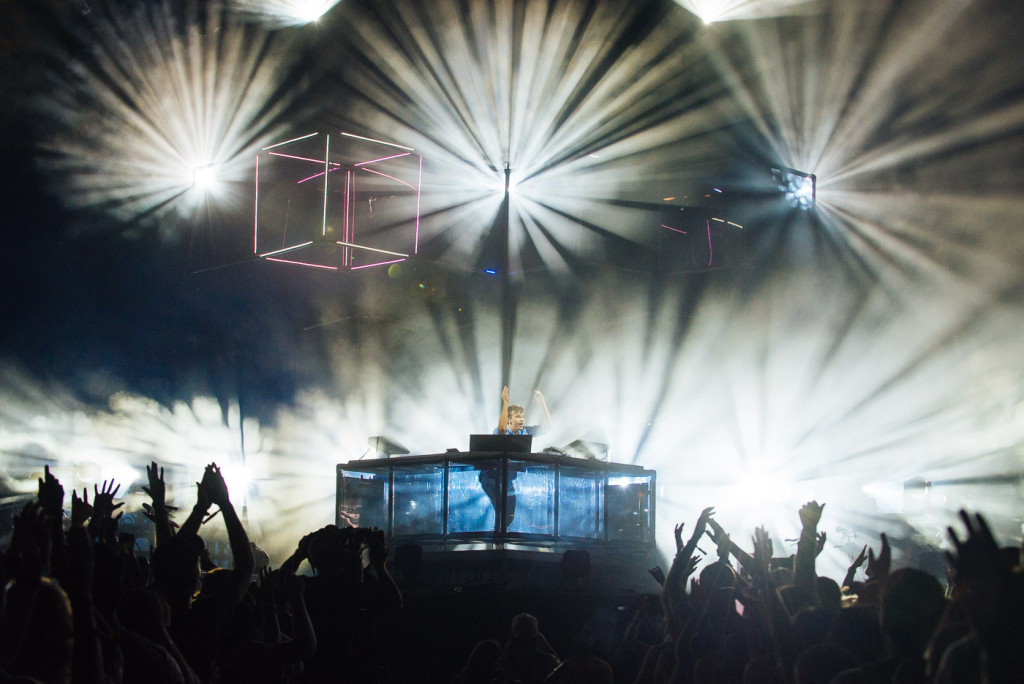 Flume is one of the most exciting electro acts of 2016. Although he’s been releasing music since he was signed in 2011, he’s cemented his place in the mainstream with the release of his album Skin this year. The breakout track from the album was the breakup track “Never Be Like You” which crossed over to radio. The Australian DJ has been working the festival circuit all summer, and by the time he took to the Green Stage (Scene Verte) as the last act of the night, the crowd had reached a fevered pitch. 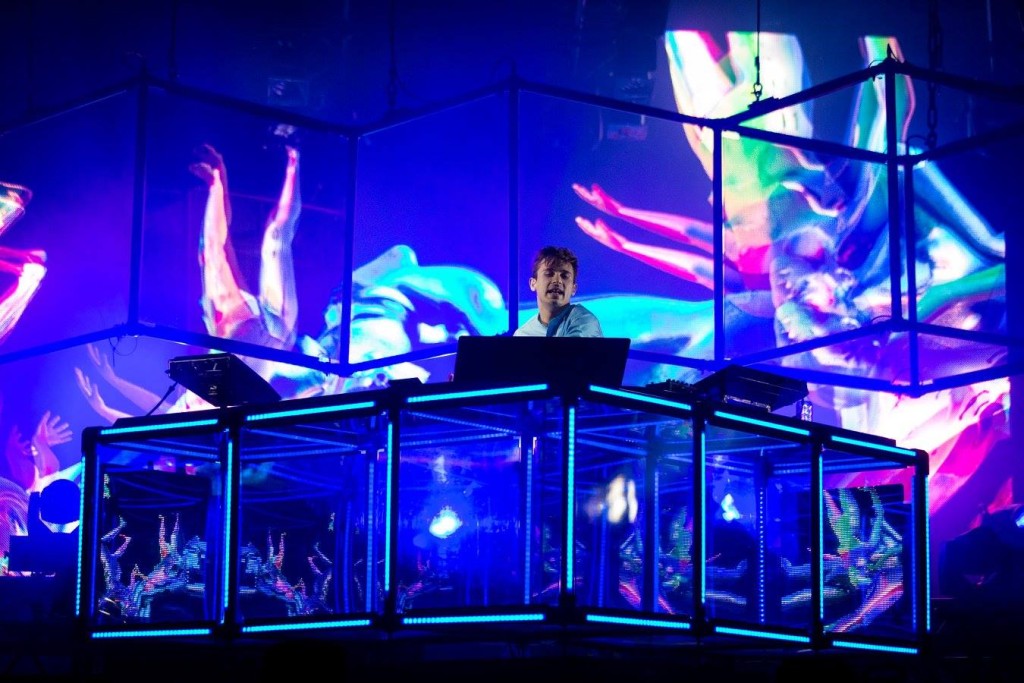 The visuals for Flume’s show featured a trippy array of dancing women, and psychedelic flowers in the vein of his cover for Skin. 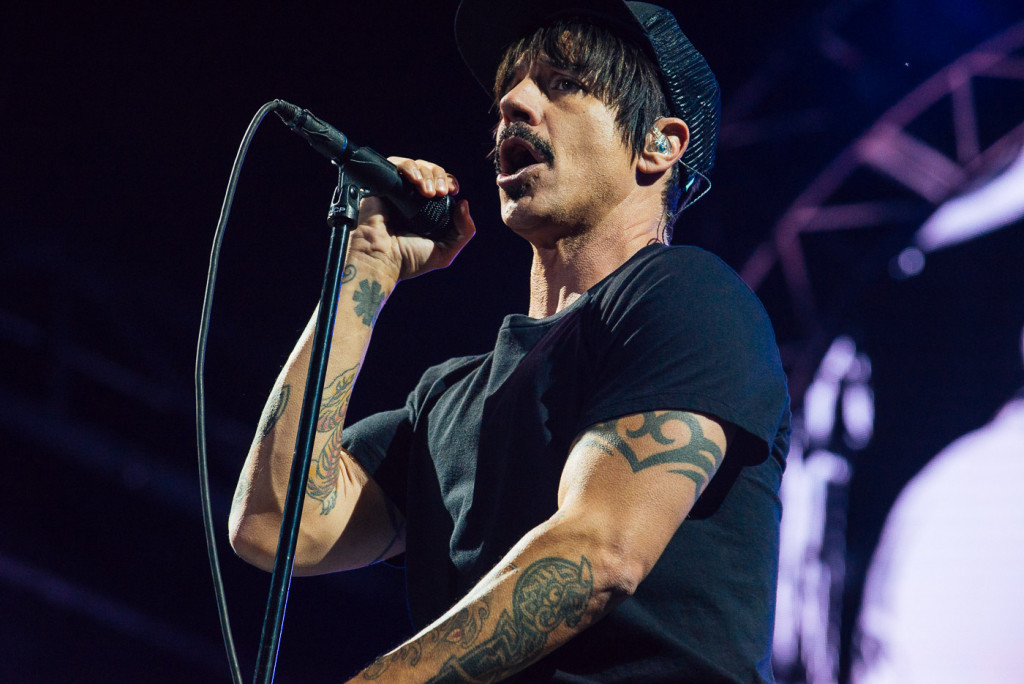 The Red Hot Chili Peppers have been performing for over 20 years and they’ve got their festival style down pat. The band were the headliner’s for the first night of Osheaga, and they turned their time on the River stage (Scene Riviere) as a nostalgic timewarp through their hits. Although frontman Anthony Kedis didn’t perform with a sock covering his penis, the vibe of their performance was a nod to their heydey in the ’90s. 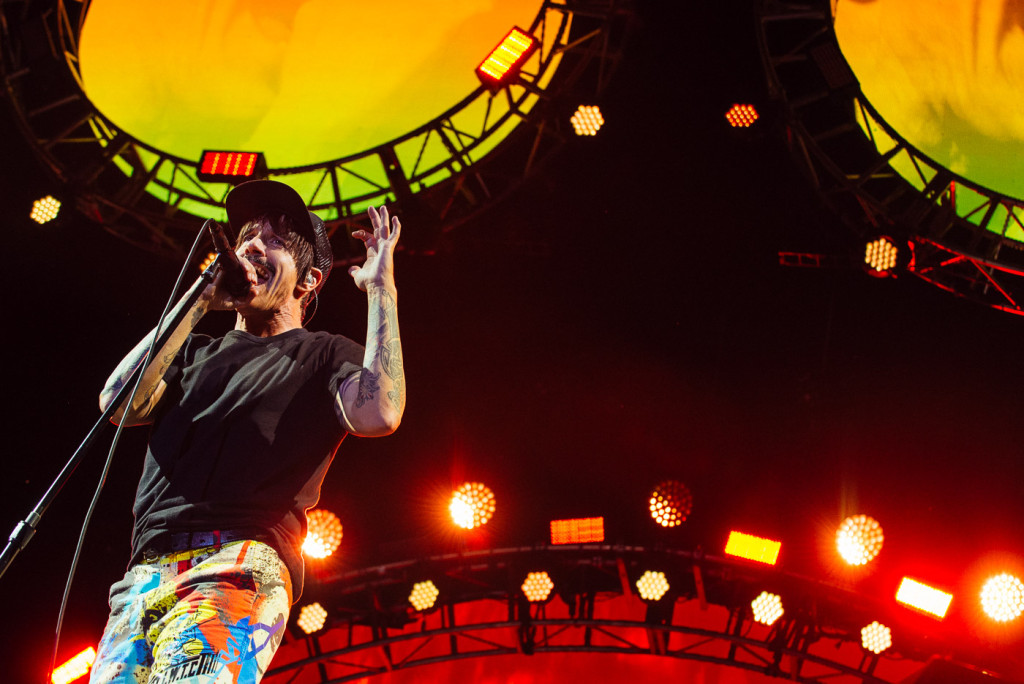 Their 100 minute set included slightly reworked versions of some classics like “Scar Tissue”, “Otherside”  and “By The Way”. 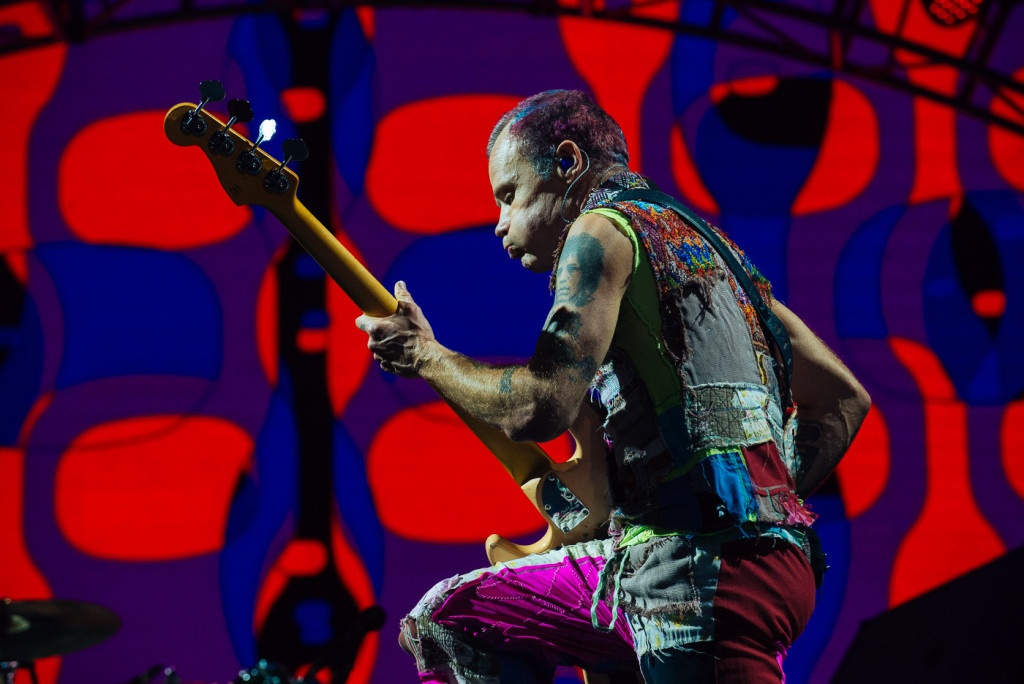 The Red Hot Chili Peppers set the bar high for the remaining headliners of Osheaga. 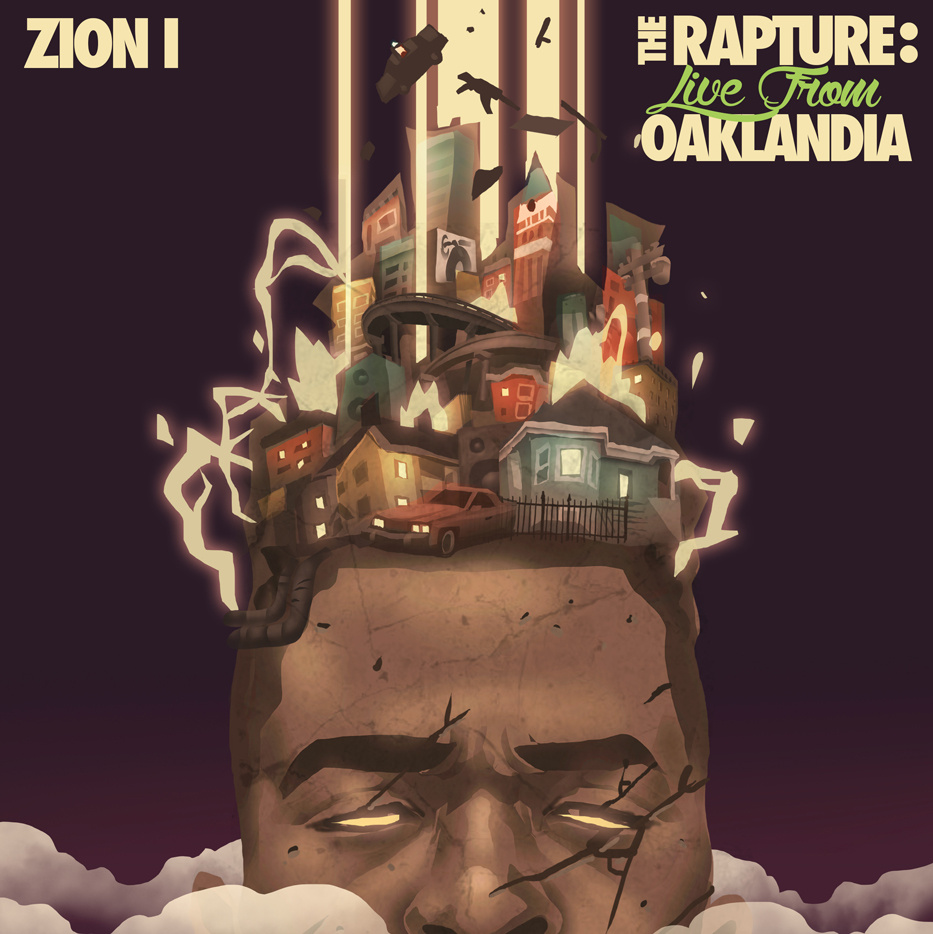 Oakland based rap group Zion I disbanded last year, with Amp Live leaving to pursue other ventures and Zumbi carrying on the namesake the two created in 1996. It’s been a bittersweet goodbye for fans of the group, who’ve listened to the duo lead the way on socially and politically conscious rap music since their debut Mind Over Matter in 2000. The years since then have seen Zumbi and Amp live record 0ver ten albums, including Heroes in The City of Dope and Heroes in The Healing of The Nation with The Grouch. Together, they’ve solidified their place in hip hop culture.

It’s comforting to note that Zion I is not really gone at all, but is seeing an evolution, one that has Baba Zumbi at the forefront of all creative decisions. It will be interesting to see how being the sole voice of Zion I challenges him. Although he’ll now be working alongside different producers in place of Amp, the lyricism in Zion I has always been Zumbi’s signature.

Zumbi’s release of The Sun, Moon and Stars in February this year, featured production by various producers and tackled themes like police brutality on songs like “Unity” and self image in the age of the internet on “Lost In Translation.”

He released The Rapture: Live from Oaklandia this summer. It’s a live album, backed by a band and was recorded in front of an audience, earlier this year. The album features classic and newer material, and is a reminder of the impressive catalog Zion I  created in their time together. We spoke with Zumbi on Episode 29 of Screen Girls on Air and he told us he’s been recording new material in Hawaii and at home for the past few months and is gearing up to release some more music.

Odd Future fans have had a few months now, to process what they probably already knew deep down –  OFWGKTA is no more. The collective, which rose to prominence on Myspace and Tumblr in the late ’00s hasn’t been together in the same physical and musical sense since a few of the members, like Frank Ocean, Earl Sweatshirt and the group’s leader Tyler the Creator blew up far bigger than anyone could have predicted.

Odd Future’s success in music signalled a change in the listenership of hip hop. They had an immediately offbeat vibe, kind of like those kids in high school who huffed paint in the washrooms and would get kicks out of pulling the fire alarm. Now those kids are running the music industry, branching out into their own lanes and making Grammy appearances. Odd Future made it cool to be weird. 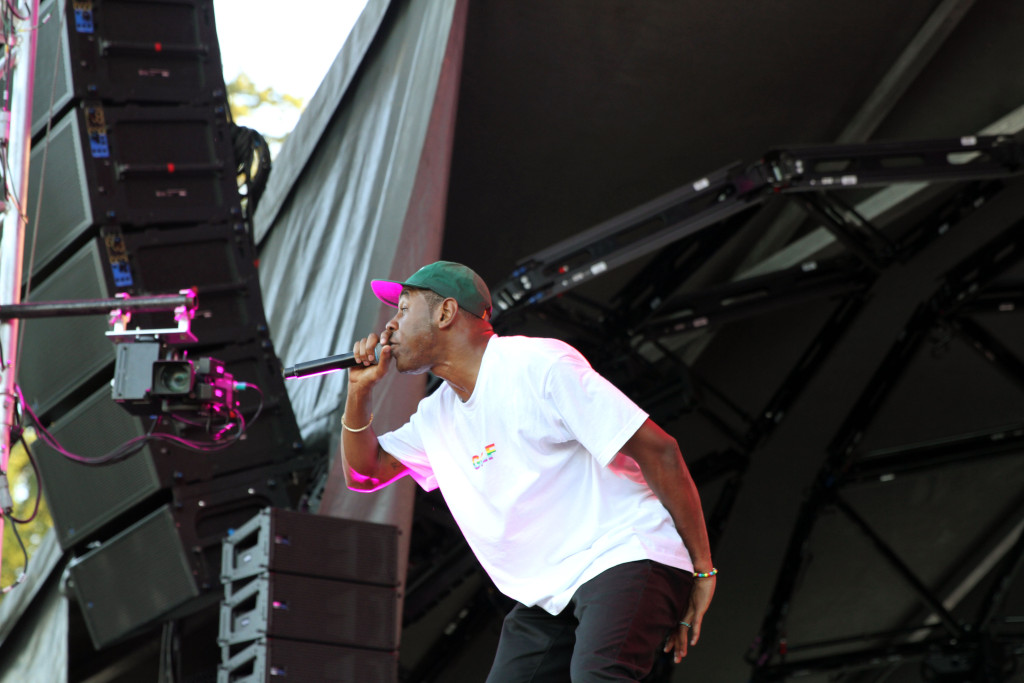 No one was more forthcoming with their eccentricity than Tyler the Creator, who at 24, is commanding large audiences (and fees no doubt) as he embarks as a truly solo artist, for perhaps the first time since the gang started recording in South Central, LA. He just released Cherry Bomb, a thirteen track album with features from Pharrell Williams, and Kanye West  – and none from Odd Future. The album is a follow up to 2013’s Wolf in which he narrated his life at the time through some characters at camp. Wolf is also where he may have figuratively killed off  his Odd Future members. 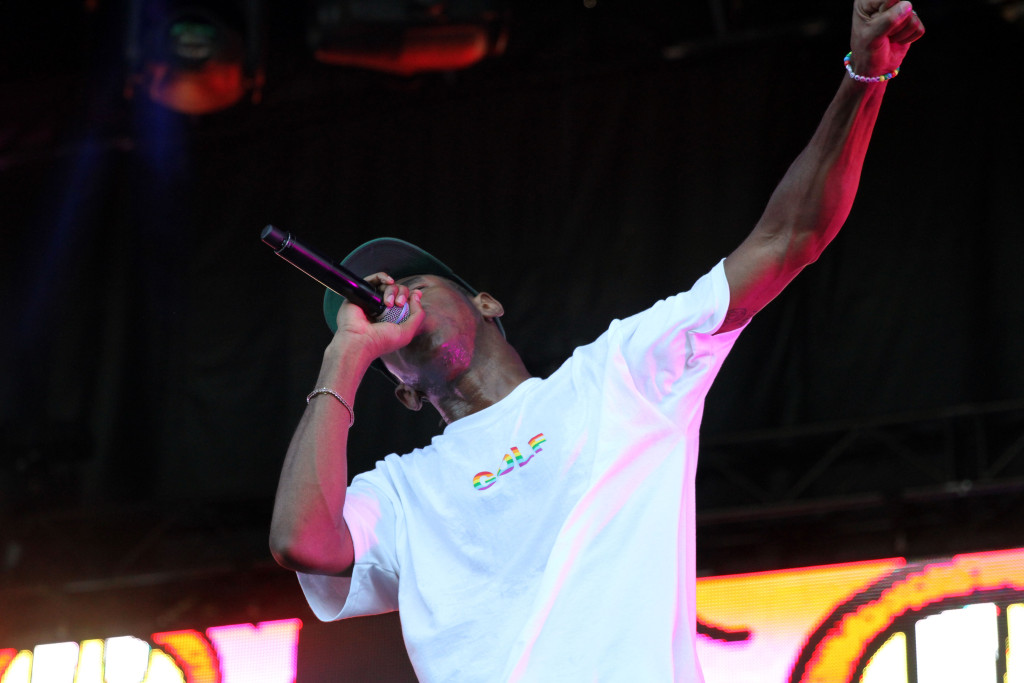 Cherry Bomb is Tyler’s first go without his friends or any fictional characters to tell his story. The result at first feels chaotic, with jazz influences and thematic references that are so unlike anything he’s ever put out. Commercial success hasn’t changed Tyler’s creative style. His music contains substance but it’s interplayed with offensive lyrics and jokey rhymes (fuck your loud pack/ and fuck your Snapchat) on songs like Smuckers.

Watching him perform tracks from the album, it’s clear that he’s enjoying his solo moment. Backed by Taco on the turntables, Tyler launched into a 45 minute set at FVDED in the Park, taking the audience from Cherrybomb back to his Bastard beginnings. If you listen to Tyler without seeing him perform, you’re missing a big part of his persona. He’s dynamic on stage, and demanding of his audience. There’s no moment of rest from the first note to the the last song; he’s constantly running across the stage, an effervescent smile never leaving his face. He’s a prankster till the end, berating people in the audience, pretending to ejaculate on a woman’s face and constantly asking people to throw up their sunglasses for him to wear (and then making sure they were returned). He’s entertaining himself, if no one else, and that is an essential part of being an entertainer. 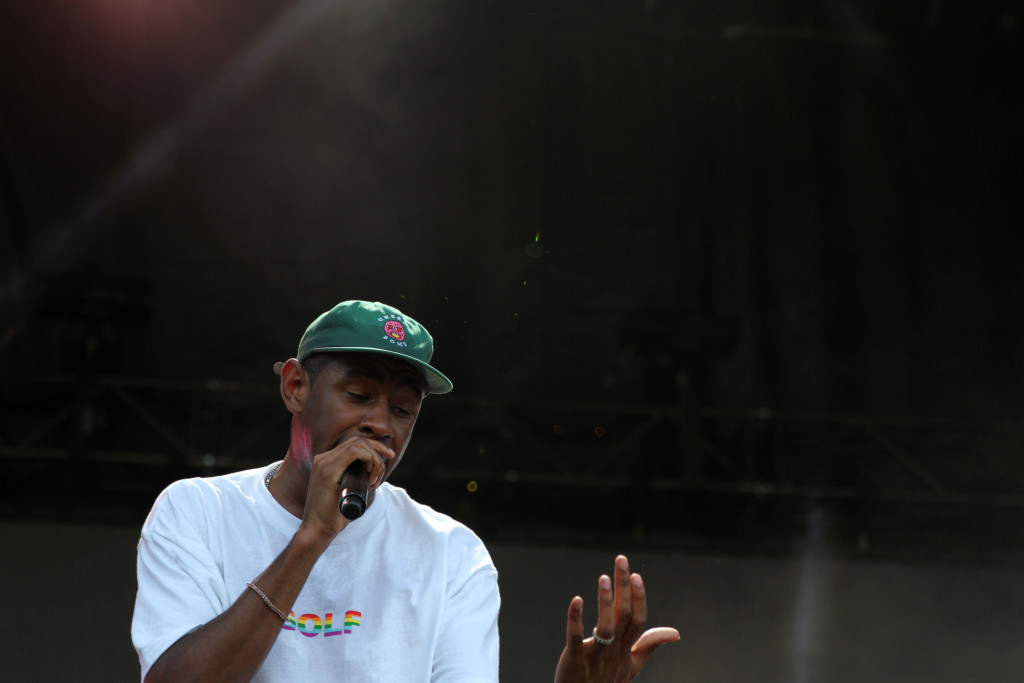 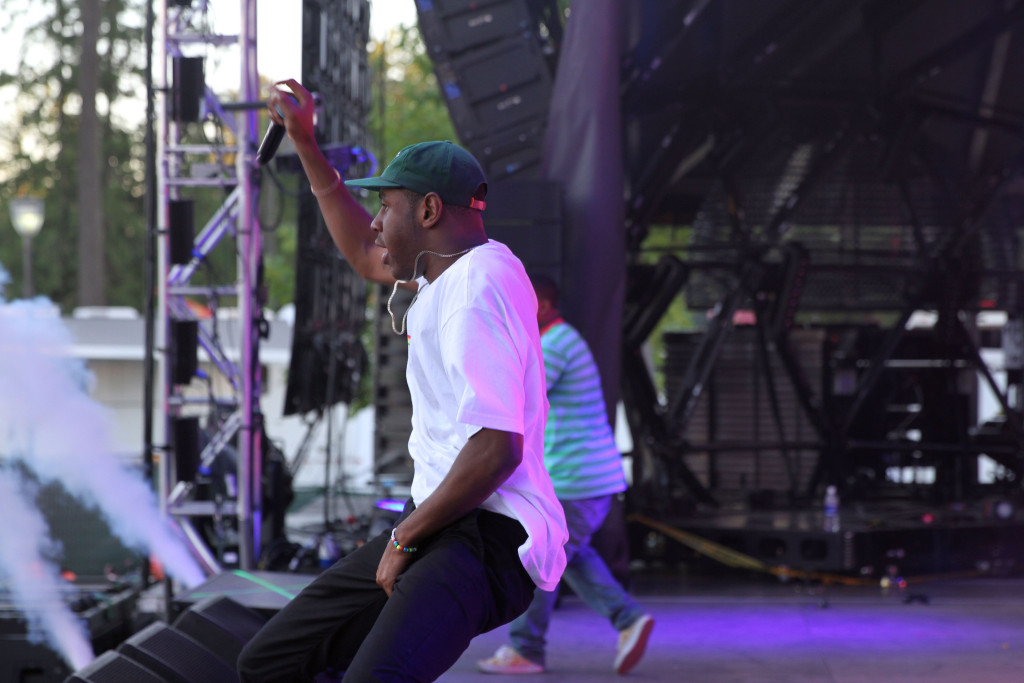 The crowning moment was when Yonkers, arguably his most “famous” song to date came on toward the end of his set. There’s always that one song you have to live with as a performer – the one song that appeals to all crowds beyond your fanbase, the one song that follows you around from show to show, the one song you’re probably sick of performing. When Yonker’s came on, Tyler led the crowd through a proper shit show, the entire open field swaying from side to side as Tyler jumped vigorously up and down on stage. It was refreshing to see someone who raps about being an asshole be completely and genuinely grateful for his time on stage.

Tyler’s got a busy few months planned, his entrepreneurial efforts with Golf Media a subscription for everything Tyler, and an accompanying magazine. He’s touring this fall, in a stadium tour alongside A$AP Rocky, Danny Brown and Vince Staples. Wherever he decides to take the direction for his next album, he’ll be just fine without his friends. 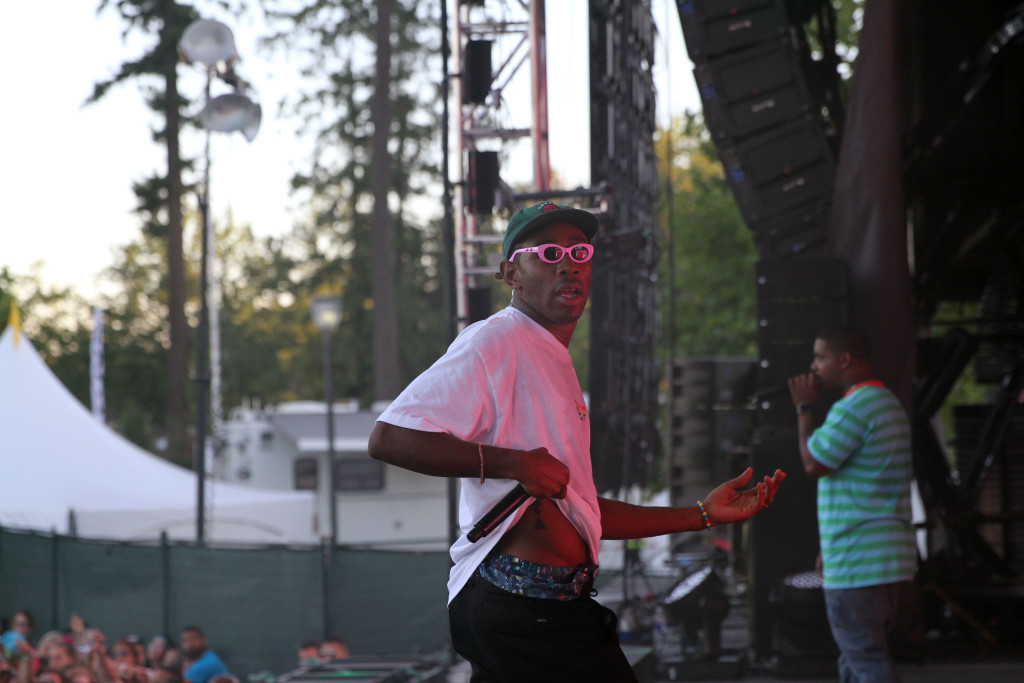 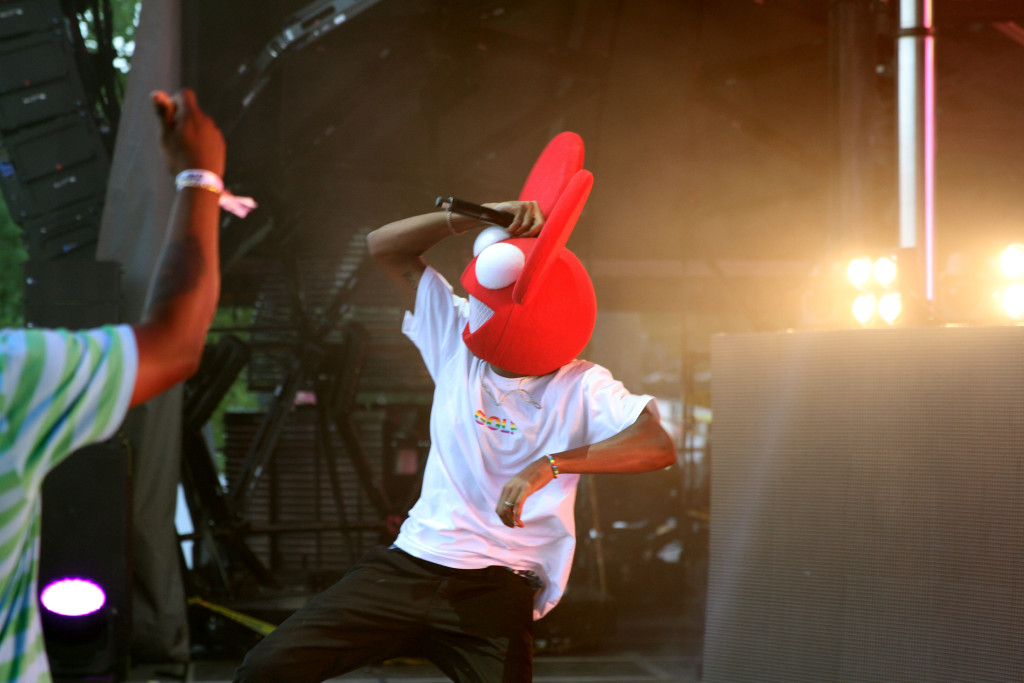 Lil Debbie is sure of herself in an industry that isn’t even fully sure how to market her. Female rappers are pushed into hyper-sexualization or androgyny, yet Debbie has shied away from being boxed into either end of the spectrum. If anyone can walk that tightrope as female rapper, it’s Lil Debbie; she is who she is. She’s in touch with her femininity and keeps that soft edge in what she does, while also making hard club anthems just as easily as her male peers.

In the music video for Me and U she sings sweetly about a relationship, and shows a tenderness that’s not usually exhibited in her catalogue. Lil Debbie can get ratchet with the best of them, but showing this more vulnerable side conveys her growth as an artist.

The first time that we saw her, with dark lips, wearing a feather earring in the Gucci Gucci video, she stood out right away. Lil Debbie’s style is synonymous with her music. She’s adorned in tattoos, gold hoops in her ears, eyes winged to the gods and a blunt in her hand. It’s a look that’s been repeated by others countless times since she first stepped out with the White Girl Mob.

Lil Debbie is definitely an influencer. She’s knows she’s been emulated countless times, but continues to stay true to her high fashion meets hood aesthetic. The style hashtag on Tumblr is filled with posts devoted to her clothes and gold capped teeth. She’s represents the ‘be yourself’ spiritedness of The Bay area and its melting pot culture of artists. She’s not acting ratchet, she’s part of the environment she’s grown up in, a place that has domineered music and dance trends in rap music for decades.

We saw her perform after our interview, and experienced some of the craziness that is a day in the life of Lil Debbie.