Major Lazer is a global phenomenon. They’ve conquered both the EDM world and mainstream music, with their blend of world music and spine tingling drops. Together, Walshy Fire, Jillionaire and Diplo have enscapsulated all the borders they’ve travelled, in their songs, taking listeners through genres like moombahton, baile funk, soca and dancehall.

The latter may have been heavily influenced by the introduction of Jamaica native, Walshy Fire to the group in 2011. Walshy had already been playing dancehalls as part of the group Black Chiney for years, and his addition to Major Lazer solidified their sound, as they prepared to Free the Universe. For Walshy, the growth from playing basement dancehalls to crowds of up to 120,000 people at Pukkelpop was instantaneous. His meeting with Diplo couldn’t have come at a better time, as he’d given in his resume to be a substitute teacher, weeks before he joined Major Lazer.

If there was anything that could have prepared him for his new jetset life, it was his time in the Dancehall. It was there that Walshy picked up the mic, and in the tradition of the Dancehall, would speak to the crowd frequently and intelligently, something he still does at Major Lazer shows. It hasn’t been the norm for DJ’s in North America, they’re usually a quiet lot, save for the same “get your hands in the air” quips that fire up the crowd. When Walshy speaks, its endearing and funny and smart, and completely not something you would expect while half-convulsing to songs like Watch Out For This and this summer’s viral hit Lean On. Walshy really brings a balance to Major Lazer, he brings the good vibes of Dancehall to the group, and has been responsible for organizing a few of the trio’s collaborations with Jamaican artists.

The trio released Free The Universe in 2013 and their follow up Peace is The Mission is due in coming weeks. It’ll be interesting to see how their sound evolves, as a quick look at the track listing for this album is stock full of features with artists from different genres like Pusha T, Travi$ Scott and Wild Belle. Major Lazer are definitely the most genre blending EDM artists around right now, and if the viral reaction to Lean On is any indication, it’s sure to once again soundtrack our summer.

We sat down with Walshy after his solo set, and talked more about the successful pairing of Caribbean and Dancehall music, and how Major Lazer was able to bridge the gap between the two.

Festivals DJ’s are the gladiators of DJs.

They perform in high pressure situations, to excess crowds in packed stadiums and at street festivals where 80,000 tuck in tighter than sardines. Their personas are so deeply rooted in their music that they pack crowds based on their names alone. They’re high octane and larger than life, and always a bit ridiculous in their displays of enthusiasm for their music. There’s always a signature style, the jump and fist pump or sailing off into the crowd in a rowboat; the crowd is already manic by the first drop, completely attuned to the DJ.

It’s exciting to see a woman hold that kind of power. Brazzabelle is one of the most promising new DJs on the circuit. Her music pushes the BPM limits of EDM music and she marches fast to her songs, her stamina not defeated during her set. Her whole vibe is a kind of dreamy Westcoast girl, from the cheery demeanour to her high slicked ponytail and California bronzed skin, it totally works.

Brazabelle is a staple on Soundcloud where she’s been entertaining dance heads pretty much since she started working on her music professionally. She caught our attention with her remix of Destiny’s Child’s Say My Name which is a staple in the catalogue of anyone who listened to great R&B in the ’90s. Her take on the oft-remixed song was to amplify it, turning the power anthem into a frenetic, frenzied dance number and it changed the vibe of the whole song.

She’s been releasing music steadily throughout this year, touring extensively playing in festivals and returning to Diplo’s Mad Decent Boat Party later this year. We sat down with her at Contact festival after her set, and she told us about her beginnings as a DJ, her production work and her rise as a female DJ.

It must be unnerving to play shows as a DJ. There’s a vulnerability in performing in front of a large crowd without an instrument, a big voice, or backup dancers to help deflect any mistakes in your own performance. All a DJ really has (other than a macbook) is an idea of what will move the crowd, and hopefully, an enthusiasm for the kind of music that they’re playing.

TOKiMONSTA’s show was probably the first we’ve seen where the DJ was moving harder than the crowd. Then again, TOKiMONSTA isn’t your average DJ. The LA native has been making beats that are infused with the kind of pep you seem to naturally possess when born in California; the general laid back feel of her sound is very West Coast but avoids any of the kitschy beach sound that has been popular as of late.

Her performance was in support of Desiderium, her latest album, which has generated constant online buzz, with fans flocking to her SoundCloud to hear snippets of tracks and her popular remixes of songs (her remix of 2 on, is better than the original.) Her energy was palpable on stage, something for the crowd to feed off of and if Desiderium is any indication, she’s carved a niche for herself as one of the hottest beat makers right now.

Desiderium is described as “an ardent desire or longing; a feeling of loss or grief for something lost.” It’s also the title of TOKiMONSTA’s latest EP. There were no lost feelings after seeing her live at the Imperial. Her show was a frenetic mix of her own music, with some ‘90s samples (One in a Million was perfection) all delivered with her contagious high octane energy. Check out photos from the show. 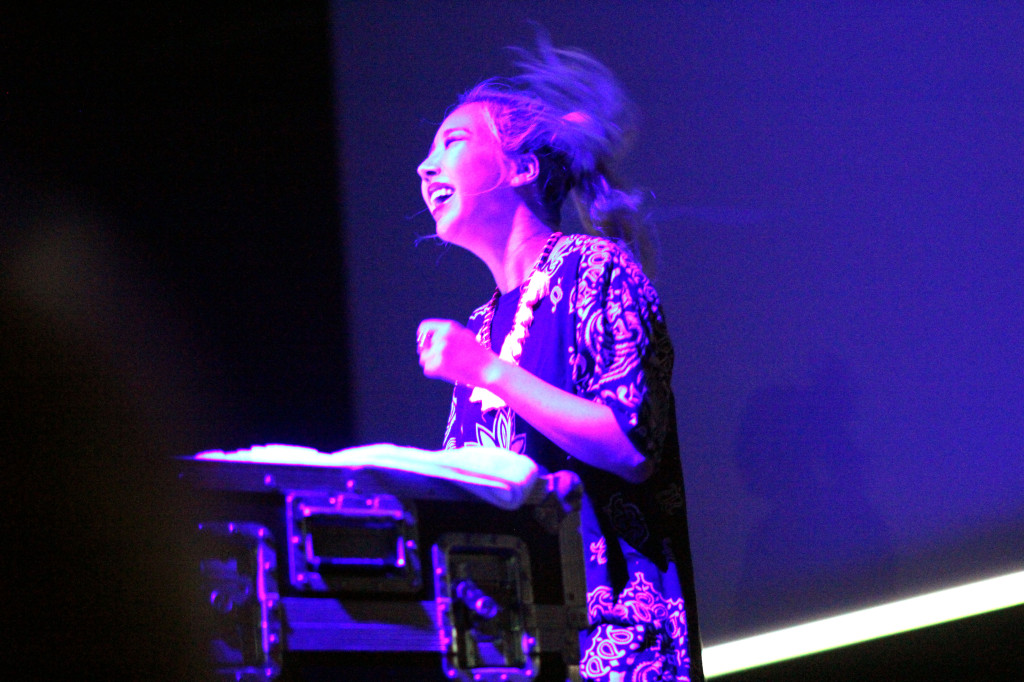 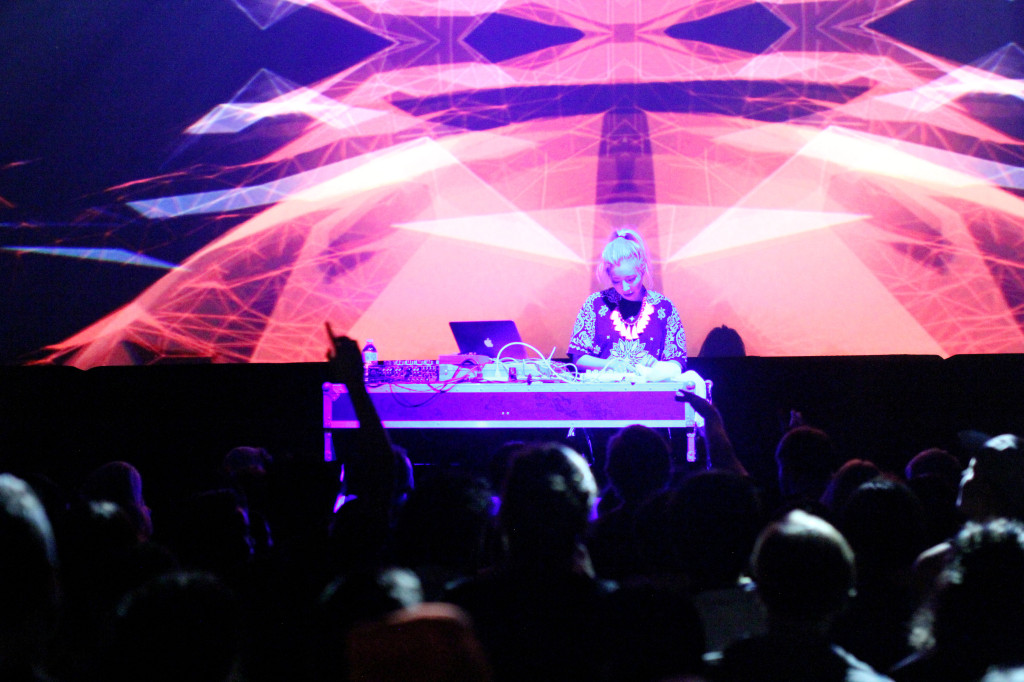 END_OF_DOCUMENT_TOKEN_TO_BE_REPLACED

Long before Major Lazer set off to Free The Universe, Ras Shorty was in Trinidad, experimenting with percussion and steel-drums. The result: Soca music – a fast, frenzied sound, backed by drums, sending listeners into high paced jubilation.

Since then, Soca has made it’s way around the world, catching the riddim that dancehall had imprinted on mainstream music in the 90’s. The sound has been triumphed by international dj’s like the Soca Twins, and Dr. Jay, but no one has evolved the sound quite like The Jillionaire.

Chris Leacock, aka Trini Chris, aka Jillionaire, is a born and bred Trinidadian, whose carribbean influences have helped shape the massive success that is Major Lazer. The electronic group has mashed in together with Moombahton, and Dancehall notes – and it works. The high BPM’s of both genres makes the pairing an easy fit, and one that is palatable for all listeners of EDM.

Major Lazer had a huge global presence last summer; they brought their own sort of Caribana to every corner of the planet. Their music has yielded exactly what they intended; it’s rambunctious and ridiculous (Bubble Butt?) and it’s given a new life to Soca music.

Jillionaire is an advocate of collaboration and has partnered with Ritchie Beretta on many tracks, including  a catchy remix of Drunk in Love. The two have also launched Feel Up Records, where Jillionaire’s ear for what’s in the zeitgeist will come in handy. It’s not an easy foray to get into, but Jillionaire has been involved in entrepreneurship, since launching a bar in Trinidad as a teenager.

We spoke with him after his set, and asked him to share with us his thoughts on collaboration, the role of young innovators and whether or not it’s possible to live on the internet.