We’re Back…
After a long break, The Screen Girls return

Its been 588 days since we last shared anything with you guys. At the time, we had no idea our last radio show, on April 20th, 2018 would actually be our last show.

Since then, we’ve been working on expanding Vellum Wellness. What started off as a way to ‘stay moisturized between the joints’ turned into a complete wellness line, with products designed to unite your mind and body.

The Vellum brand is heavily influenced from our time as Screen Girls and our late nights covering shows and interviewing artists. It was during our time shooting and editing for The Screen Girls that we discovered what wellness meant to us. It was tough with only two of us, going out every night to cover the latest rap shows and snag interviews. Each night, we fell asleep knowing that our sleep hygiene was suffering and our overall sense of well being was slipping away from us. 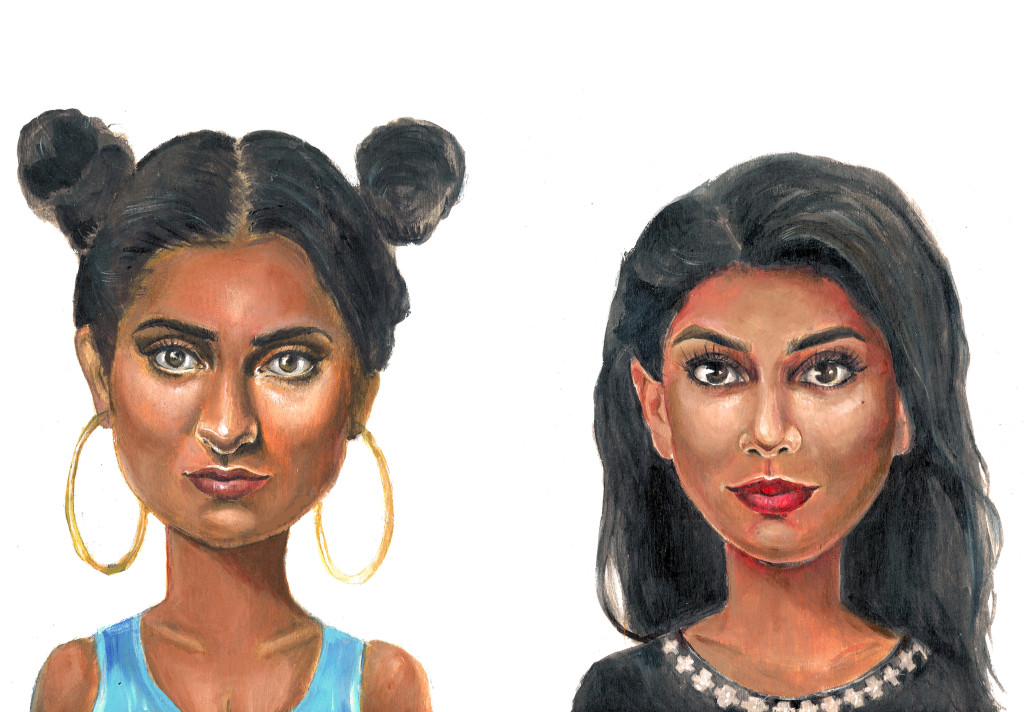 So much of what inspired the Vellum brand was the journey of artists we met along the way as Screen Girls. Staying physically healthy on tour is a challenge, and with the current state of the world today, staying mentally healthy is even more challenging. We’ve long praised the benefits of cannabis sativa for both the mind and body, and it felt natural for us to include a form of this magical plant in our first formulated product – Elevate Hemp Hand Lotion. We’re so proud of this unique formula we created in conjunction with our team of experts, and even more proud to present our first full collection: Mental Essentials.

Mental Essentials is a collection of 100% pure essential oils designed to reflect your mood and emotions. A strong appreciation of art is at the cornerstone of our brand values, so we worked with LA based artist MRBBABY and commissioned hand painted illustrations of the oils personified into characters. The idea is that when you inhale the oil, and reflect upon the artwork, your mind and body work together to explore the mood the oil is praised for. We found Lavender Oil to work wonders at restoring our night routines.

Although our time at CiTR 107.9 fm has come to an end, we’re just getting started with Vellum and we’re so excited to share updates with you along the way. We’ll still be covering artists, but this time we’ll be focusing a little more on their self care processes, for all the latest updates, follow @vellumwellness on social media (Twitter, IG, FB) and check out the blog SMOKE + MiRRORS. While you’re at it, pick up some products to get started on your wellness journey and use the code TSG18 for 40% off your first purchase (code valid until December 31st, 2018). 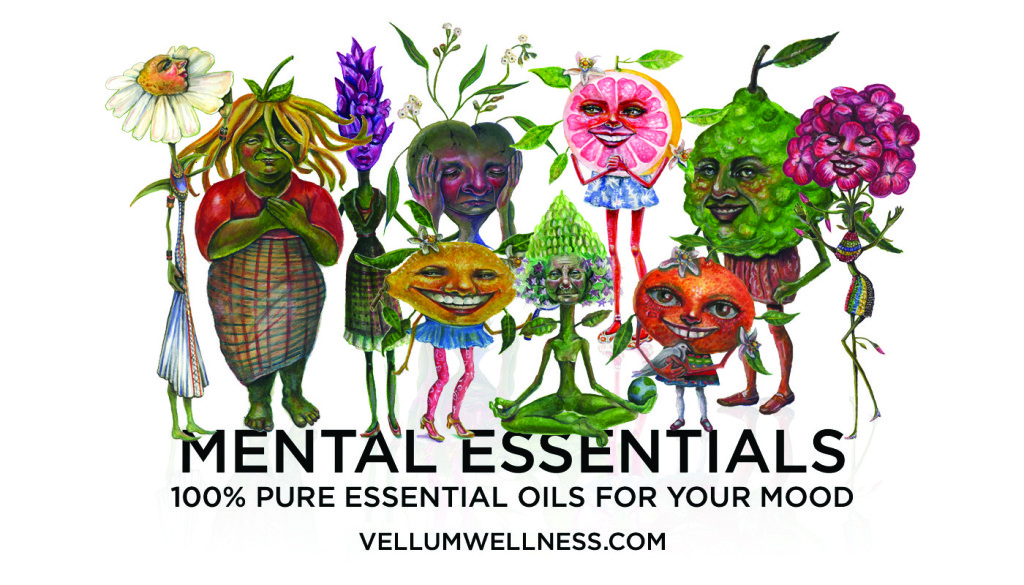 Fast fashion has become one of the most challenging parts of the design process. Mass retailers like Zara, H&M and Forever 21 have bypassed the fashion week calendar for a relentless cycle of trends that are often times imitations of luxury designs, made at a cheaper and faster rate. These fast fashion retailers are achieving multi-billion dollar revenues from a modus operandi of high volumes and low quality. Other than the moral implications these garments carry, which are often made overseas in poor working conditions – fashion designers are having their work and intellectual property replicated and shipped faster than ever, and they’re having a hard time keeping up with the pace of current fashion cycle.

According to Elizabeth Cline, who examines the implications of fast fashion in her book Overdressed: The Shockingly High Cost of Cheap Fashion, H&M and Forever 21 receive new shipments of clothing daily, while UK retailer Topshop adds over 400 styles each week to its website. With retailers churning out knocked off styles at rapid rates, designers are feeling the pressure of maintaining creativity

The fashion community hasn’t developed a singular outlook on the matter neither. Olivier Rousteing says he loves when Zara copies his designs; meanwhile, Anna Sui gifted shirts branding the founders of Forever 21 as “Outlaws” at one of her runway shows (she’s sued the company for infringement). While there isn’t a readily available solution to combat fast fashion retailers from duplicating designer pieces, there are a few known ways designers are making it harder. From intricate trims, to luxe fabrics and structure, some designers are decidedly designing items which are difficult to reproduce in mass quantities.

It seems, however, that even the designers that stand between high end design, and fast fashion retailers, are feelings the effects of this fast fashion cycle. Rebecca Minkoff launched her brand in 2005, and has seen it grow at an exponential rate in the past decade. Despite launching the brand during what seems like the height of fast fashion replications, the brand has successfully grown from handbags, to now include apparel, shoes, jewelry, and a men’s accessory line, Ben Minkoff (operated by her brother and collaborator, Uri Minkoff). The Rebecca Minkoff brand is currently on the verge of a Michael Kors-esque global takeover, and has established itself as a prominent, strong designer, standing between high end design and fast fashion retailers. The ever-evolving trend cycle has affected fashion designers at both ends of the spectrum – from the high-end to the more affordable.

We spoke with Rebecca about her thoughts on the issue and what designers can do to change the current cycle. She believes if enough designers band together, a change could come about. As she points out, the rise of social media allows us to all be our own broadcasting network. Rebecca also shared with us her success story and told us about how her mother’s guidance helped her build an empire out of her first hit bag.

When Rebecca Minkoff launched “The Morning After Bag” in 2005, she made waves around Hollywood and launched a career that has been nothing short of a fairytale. Her line has expanded since then to include ready-to-wear, handbags, shoes, jewelry and apparel. Her self-ascribed aesthetic is “Downtown Romantic.” This season that translated to bags in soft colours, lots of lavender and pink, with many of the pieces adorned in studded hardware, edging out anything too dainty. This is a consistent theme that crosses through her designs. Popular trends of the moment are present in her collection, this season, fringed tassels swing off clutches and apparel alike, but reimagined and refined for the Rebecca Minkoff customer.

Who is the Rebecca Minkoff customer? At first glance, her line is definitely part of the starter pack for the 20+ something career girl, looking for a bit of perceived NYC cool without spending thousands of dollars. The line seems to be a reflection of Rebecca’s own evolution as a woman. She’s gone from launching her line in her 20’s to becoming a wife and mother and it’s shows in the kinds of bags she offers. From the Mini Mac’s that are the perfect size for younger girls as well as the Rebecca Minkoff line of baby bags, it’s clearly intended for a wide variety of women.

We sat down with Rebecca Minkoff after previewing her current line at Holt Renfrew, our video interview with Rebecca is up next. 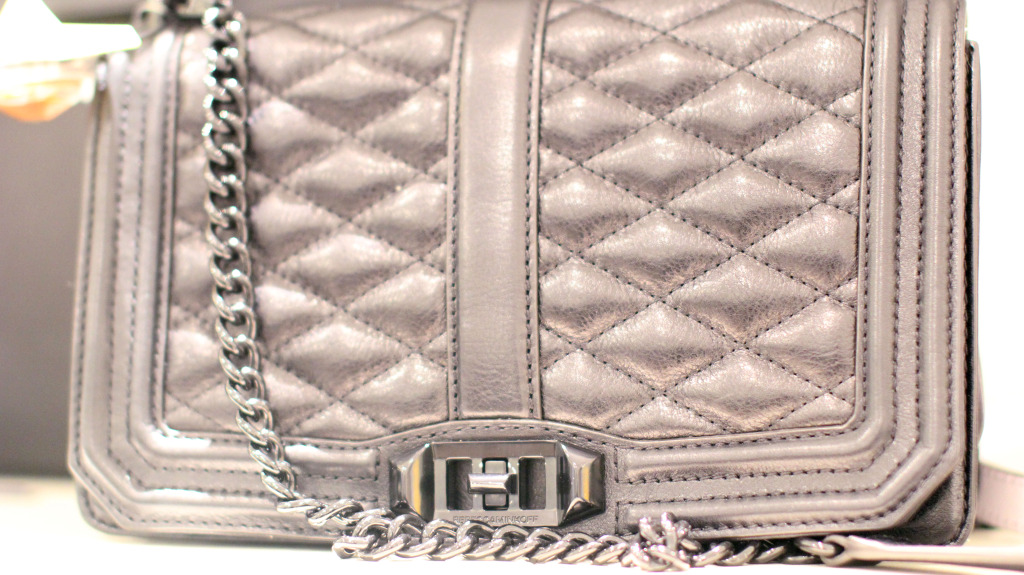 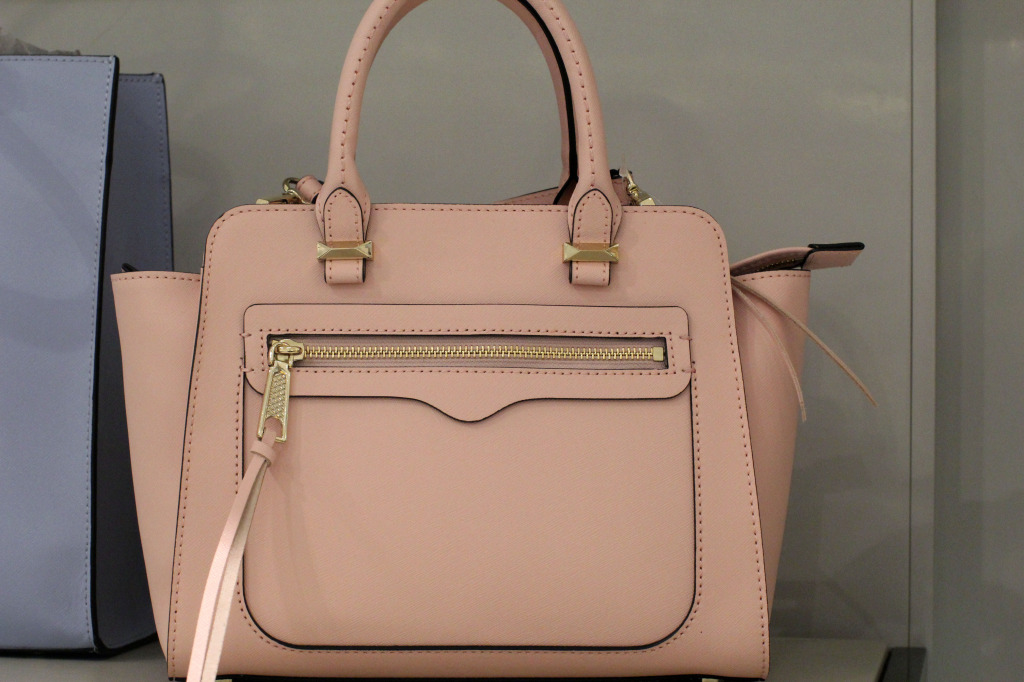 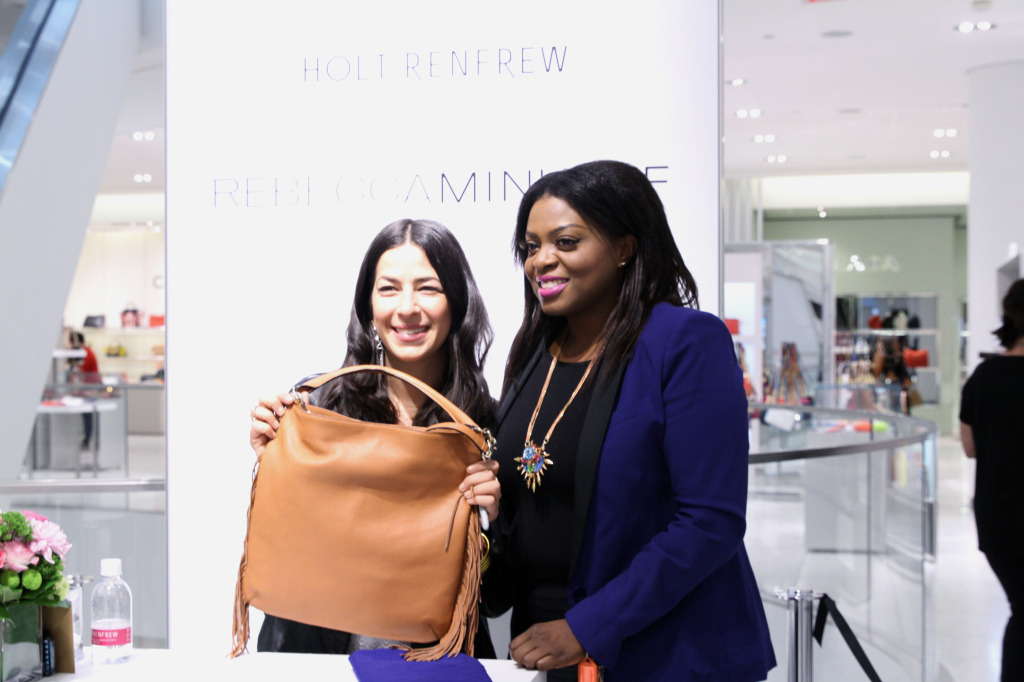 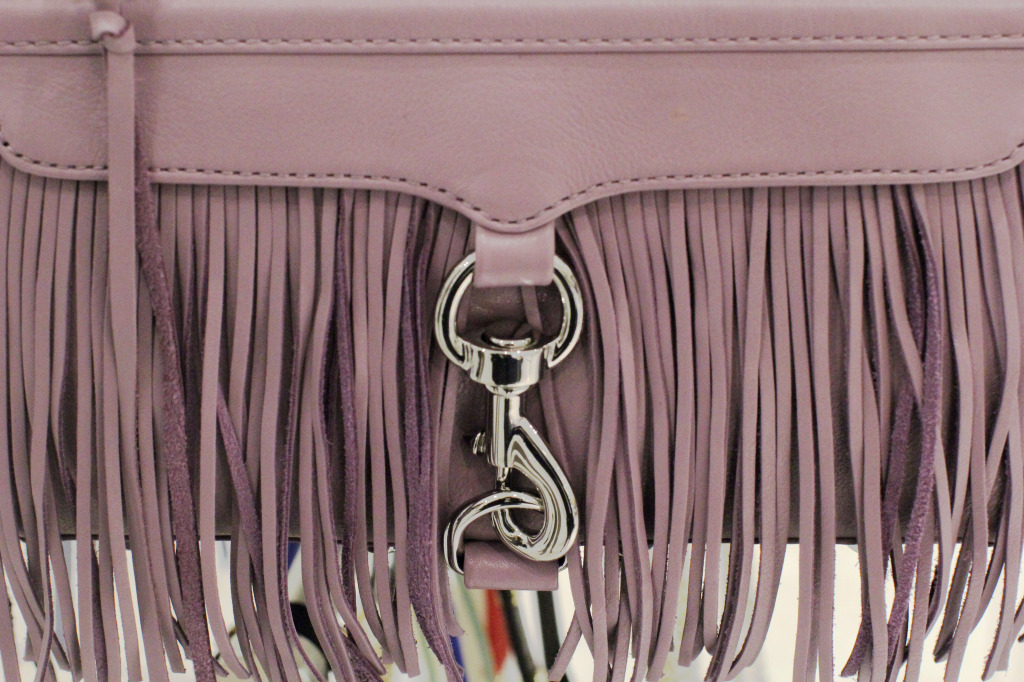 Millinery is the long upheld craft of designing and manufacturing hats, and there is no one doing it quite like Gladys Tamez. Her burgeoning line has become a go-to for those seeking a sleek, long lasting hat to add to their wardrobe.

The Monterrey born, LA based designer has added a contemporary, downtown street vibe to the market with her line, which launched in 2011. When you think of high end hats, images of the ‘fancy hat’ a la Philip Treacy come to mind. Gladys creates bespoke pieces like this one for Sia, but the hats in her collection are wearable from day to day, made to last and shift through seasons. She experiments with shape, the crown of the hat often a nod to her latest inspiration, whether it’s the zodiac signs or horses in space. She adds character to her canvas by using interesting materials like beaver and various hardware.

Gladys doesn’t give in to the commonly held belief that there’s people who look good in hats and other’s that just don’t. According to her, it’s all about finding the right hat to suit your face shape. The art of making a hat has become a bit lost in the mass consumption era of fast fashion, but in a few short years, Gladys has reclaimed the hat as a worthy investment piece.

We visited Gladys in her showroom in the Fashion District of Los Angeles to learn more about the process behind making one of her hats. She explained the laborious process to us and discussed her favorite materials to work with and the chance visit to a 4th generation Spanish hatmakers shop, that led to the creation of her collection.

To understand the cohesion in a collection, you have to look at its inspiration. Each season, creative directors churn out collections with mixed inspirations from the most obscure and unlikely of sources. It’s fascinating to see how designers, season after season, mesh their various inspirations to create a line of garments and accessories that somehow still feels new. To borrow from a cliche – fashion, like history, tends to repeat itself. The importance of fashion lays in its role as an archivist for culture, and the mindset of that era. Using history as inspiration is a great way to pay homage to a time which that defined the industry.

For Eddie Borgo, his favorite time in fashion history was the rise of American costume jewelry, in the ’50s and ’60s. This era of jewelry serves as continual inspiration for Eddie and his team at their NYC based studio. The time that Eddie takes to carefully research and refine the best parts of certain periods and influential figures in fashion is reflected in his own, unique vision. He’s incorporated a Majorelle blue in his F/W collection, that captures the mood of the Majorelle Garden in Morocco. Meanwhile, his holiday collection is an ode to the colorfield artists of the ’60s, with geometric, graphic shapes inspired by Kenneth Nolan. It’s these developed details in his collections that make it clear that Eddie is as much a student of fashion as he is a contributor.

Symbolism runs deep in Eddie’s collections, like the deep red colour he used in his F/W to represent life in Marrakech, and it’s something that’s obviously resonating with a lot of people, as seen by his success in the infancy of his company. We like our jewelry to have a meaning and Eddie Borgo’s line speaks to those who want a new kind of classic, with modern silhouettes that still retain the durability and longevity of eras past.

We caught up with Eddie at Holt Renfrew and he talked to us about his love of costume jewelry and also filled us in on the beginnings of Eddie Borgo studio and how living in NYC has inspired both his line and his life.