We recently received an email from the Surrey Art Gallery, inviting us to check out Toronto based artist, Nep Sidhu’s first solo exhibit, Shadows in the Major Seventh.

It was our first visit to the gallery and we were warmly greeted by Jordan Strom, the curator of exhibitions at the gallery. He introduced us to Nep, who was setting up, and getting the final preparations ready for Saturday’s opening reception. Nep’s exhibit features mixed large scale work in mixed media, sculpture and textile design.

Nep describes himself as an artist linking the ancient with the here and now. When viewing his work, the ancient part stands out immediately – for example: Confirmation, a 3-piece work, created with ink on paper, brass and sheet veneer marble, features Kufic script. Kufic, the oldest calligraphic form of Arabic scripts, was developed around the end of the 8th century in Kufa, Iraq. As Nep gave us a narrated tour of his work, he explained how the ancient Kufic script also serves as the here and now. In Confirmation, the translated script is actually the lyrics of frequent collaborator Ishmael Butler, of hip-hop duo Shabazz Palaces. Nep sees timelessness as an important quality of art, so it’s not surprising that his work, overall, doesn’t have too many obvious pop culture references present. 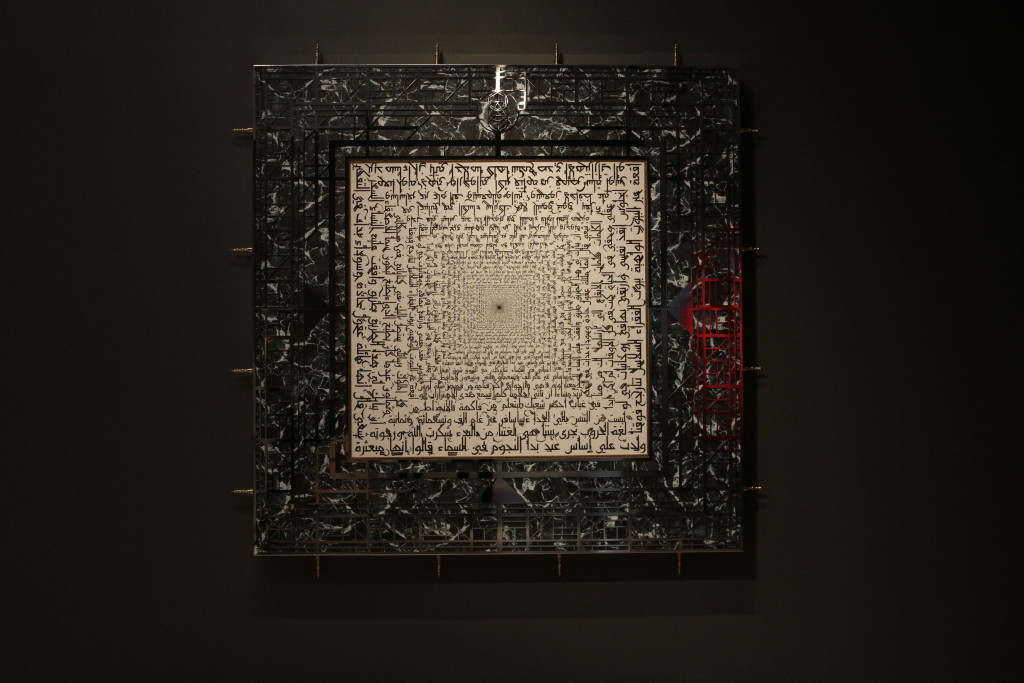 His work is chock-full of global influences. Nep draws from his own Northern Indian heritage, as well as invoking elements of several African and Middle Eastern cultures. It’s a worldly take on the various social justice issues he covers in his work. One work in particular, a series of elaborate textile designs titled Pigs in Paradise, is a collaborative effort with Alaskan artist Nicholas Galanin. The garments advocate for the protection of aboriginal women, who’ve been largely marginalized in society. Thematically, Nep’s art is largely tied to social justice issues, and the divine feminine. 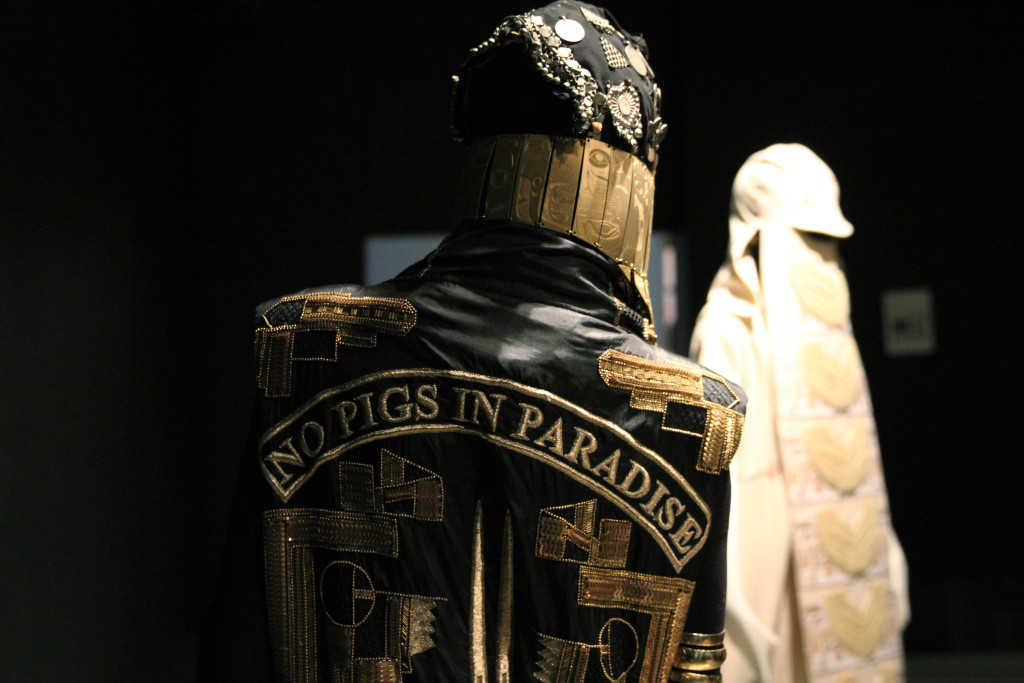 When we were first exploring Nep’s work, we were interested in the concept of Paradise Sportif, a non-commercial clothing line. We noticed Nep doesn’t seem to references collections or seasons when explaining Paradise Sportif, but rather describes his work in chapters. Because Paradise Sportif isn’t a commercial clothing line, it doesn’t operate within seasons or collections. This unique approach to a clothing line is intriguing, in the sense that it’s not inundated with the demands of the fashion industry. Paradise Sportif is made up of materials and processes like embroidered silk, embossed leather, and wool chenille, and are worn by members of Black Constellation and other friends. The modern elements in his clothing – the leather sleeves, silk bombers and vibrant red jerseys would fit in well at major luxury retailers, so it’s surprising that he’s chosen to avoid commercialization. When broaching Nep about this, he explained, “It’s one thing to create pieces in the numbers I do, it’s another thing to be answerable for a large quantity that needs then constant touching base with purveyors of the work. There’s a lot that becomes involved in which, I sort of fall back from, I’m not too interested in.”

For now, it seems that Nep is focusing on his artistry, and communicating his thoughts on issues that are affecting both his community and human consciousness overall. With social media, and the communities that exist online, it’s easy to forget about the physical communities around us, but for Nep, it’s a strong point of reference and inspiration, stemming from his Sikh upbringing.

After looking at his pieces, we sat down with him for a quick chat, about process, timelessness, and his non-commercial clothing line, Paradise Sportif.

Check out the full interview below, after the pictures. 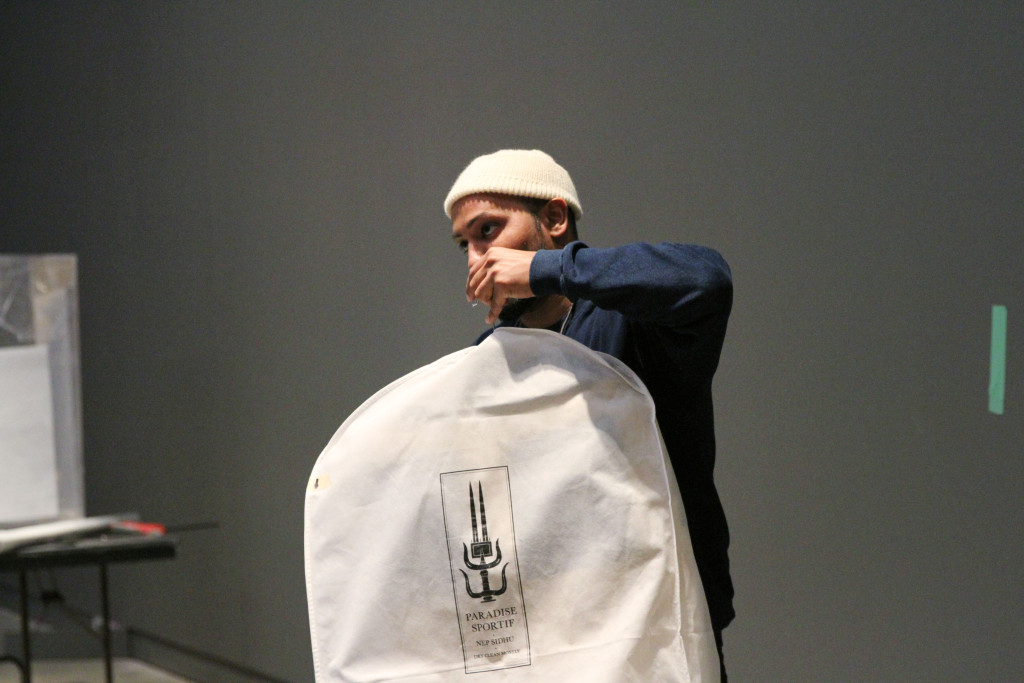 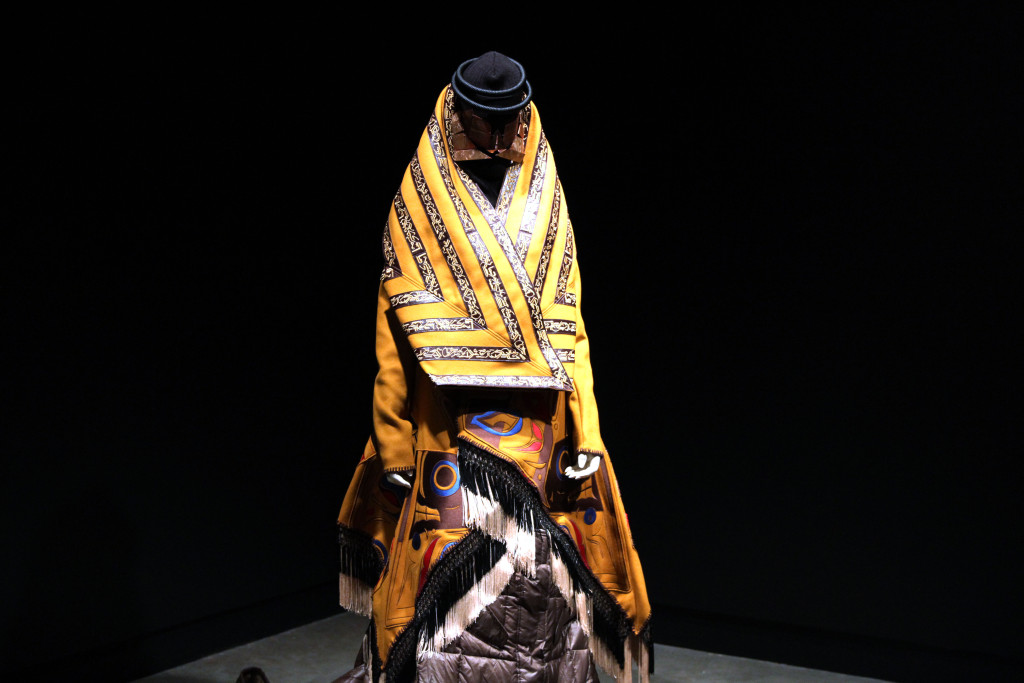 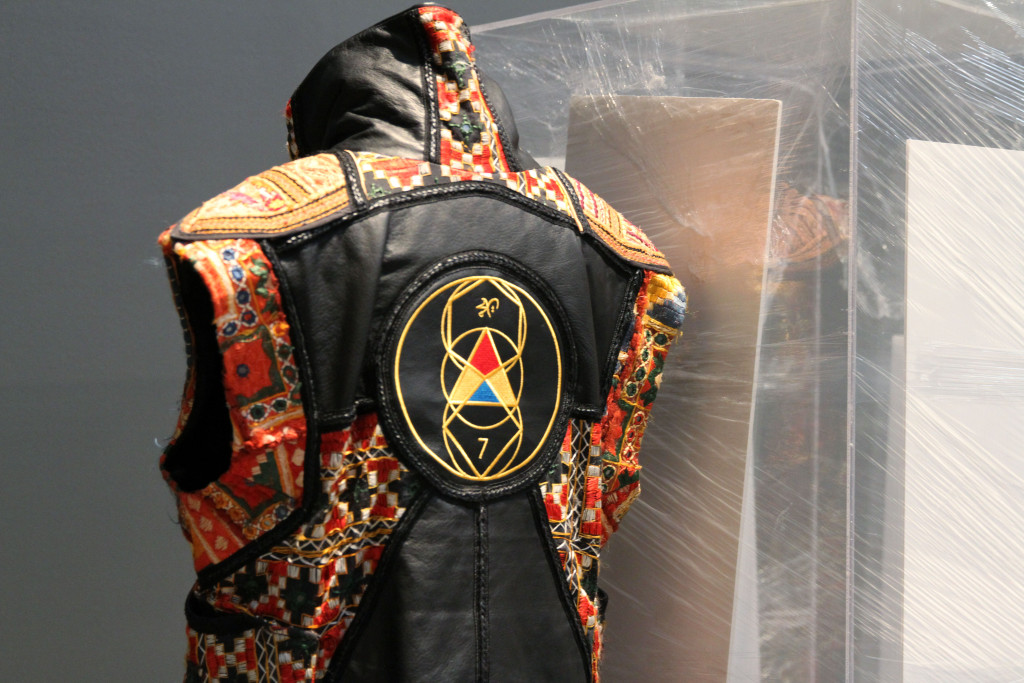 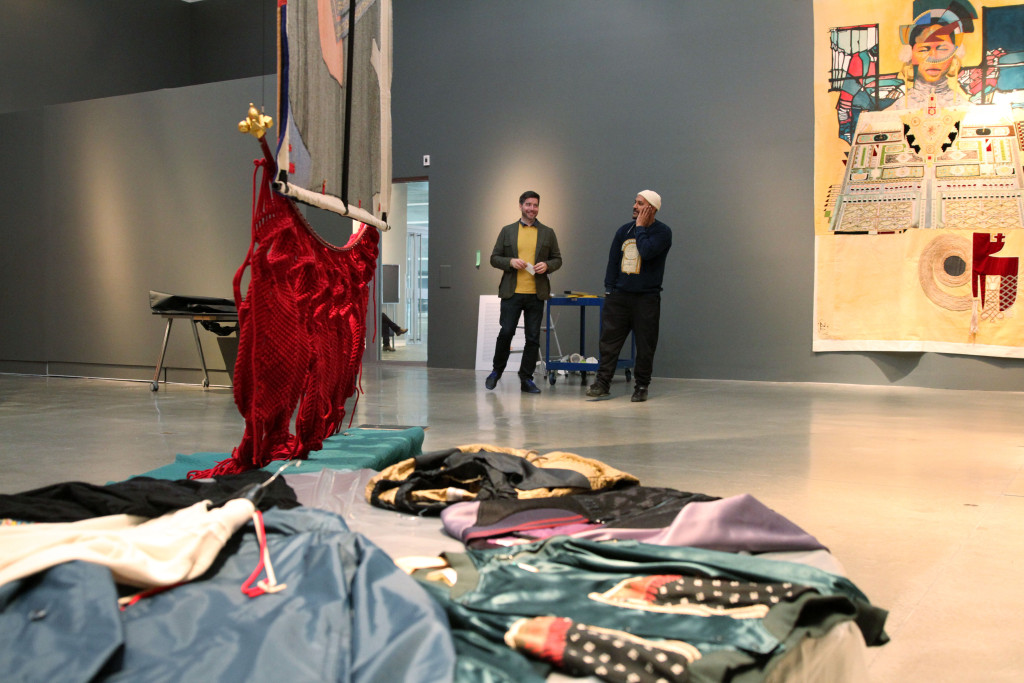 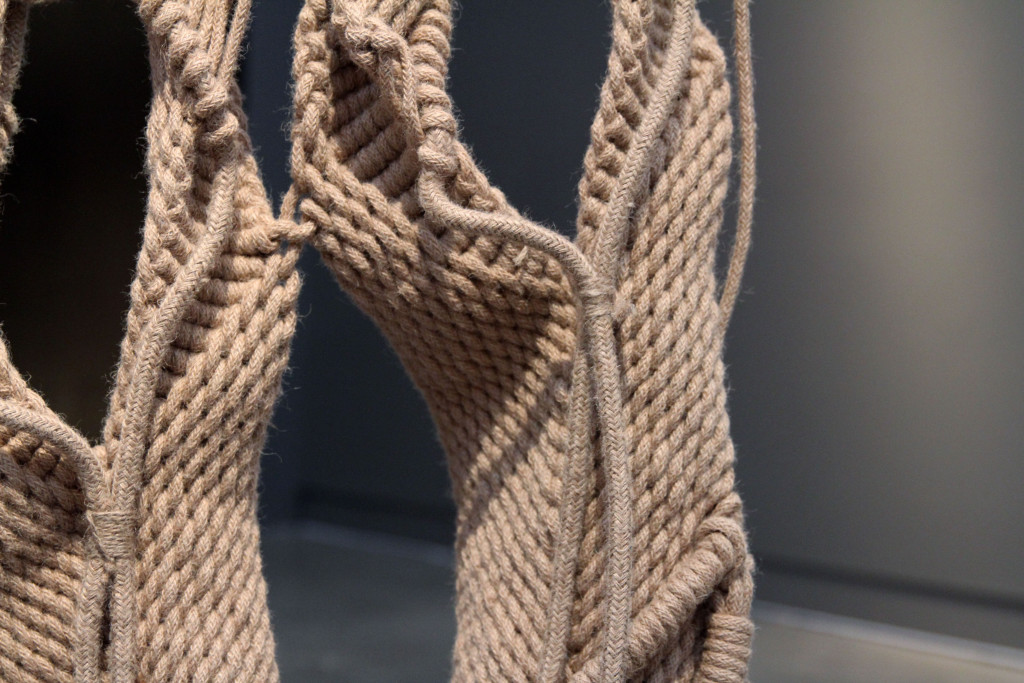 “Aux arms et caetera” is a 1979 Gainsbourg album whose title song was considered an insult to the French Republic and reportedly even pissed off Bob Marley. The song also served as inspiration for installation artists Sam Wheeler and Dino Siampos, a creative duo who have taken window displays to new dimensions. They’ve collaborated with an impressive roster of clients, to produce visually arresting displays that perfectly merry their playful taste with the brands luxe message.

Dino and Sam have established a cohesive workflow, their bond (established during their time in their band Soft) has allowed them to venture past installations and collaborate on Lavender Lake, their bar in Brooklyn and on Svpscription, a quarterly curated subscription service delivering hard to find items to discerning customers.

We met Aux Armes in their spacious Brooklyn studio, replete with exposed brick, red furniture and quirky statues. Their space is reflective of their mannerisms, calm and cool without being contrived. We spoke with Sam and Dino about their Barneys beginnings, what it’s like to create for big brands and if they consider themselves artists.

How did Barneys play a role in the inception of Aux Armes?

S: I was 23 when I moved to NYC, April 2001. My first job was selling jeans at Barneys on the 8th floor at the Madison flagship. Working at Barneys was like going to grad school for business. It was a crash course in a very specific language. In terms of how to think about the environment and how to think about making things both functional and artistic, it was when I still thought of it like an artist.

D: I was working for Barneys in Chicago, doing freelance work for them, and around that time they were opening Barneys co-ops around the US and they flew me to New York to open one in Soho. I was here for a week and had a good time and was just super impressed by everyone and obviously the city. The team mentioned that there would be a position open if i wanted it, in New York, so of course I took it and moved. I was 25.

At what point did you decide that you wanted to work together?

S: I met Dino at a party when he was here opening the 18th street co-op. We were friends, but not super close friends, I had made friends with everyone in the visual department. It was really through the band we were in that we became such close friends.  Going on the road and practicing five nights a week. Going on the road, you really get to know who a person is.

D: We both found ourselves in the same position, both being freelance, even though Sam was still at Barneys, he was kind of trying to get himself out of that. So he’d come and help me out on jobs, on the freelance side of things, and I would do the same with him, and it just got to the point where we were like well, why don’t we just actually just do the job always together, maybe call ourselves something, it was almost that basic. It made sense, and we had fun with the name, and making our own business cards, getting a website going, and it all just kind of started from there.

You started your business during the recession; were you worried about failing?

S:  It was scary, to leave a full time job and the economy wasn’t okay, and to possibly have no pay, except for a couple of freelance clients. Basically we were doing one store once a month. Also without the support structure of a team, we’re always going to be on our own and on the fly.  There was a certain element of faking it until we made it. Oh yeah, we can do that…how do we do that? We met great people, other fabricators and designers.

D: We luckily didn’t have to do much to try and find work. We worked with a lot of similar creatives, in different fields and we all came up together at the same time.  There’s this kind of unspoken support system, and that kind of really helped us, to grow and acquire work. At the same time, people do like the story that we’re like this duo, semi stylish, there’s a perception there, and we were in a band together, and we’re friends, we’re always seen pretty much together during the day. END_OF_DOCUMENT_TOKEN_TO_BE_REPLACED 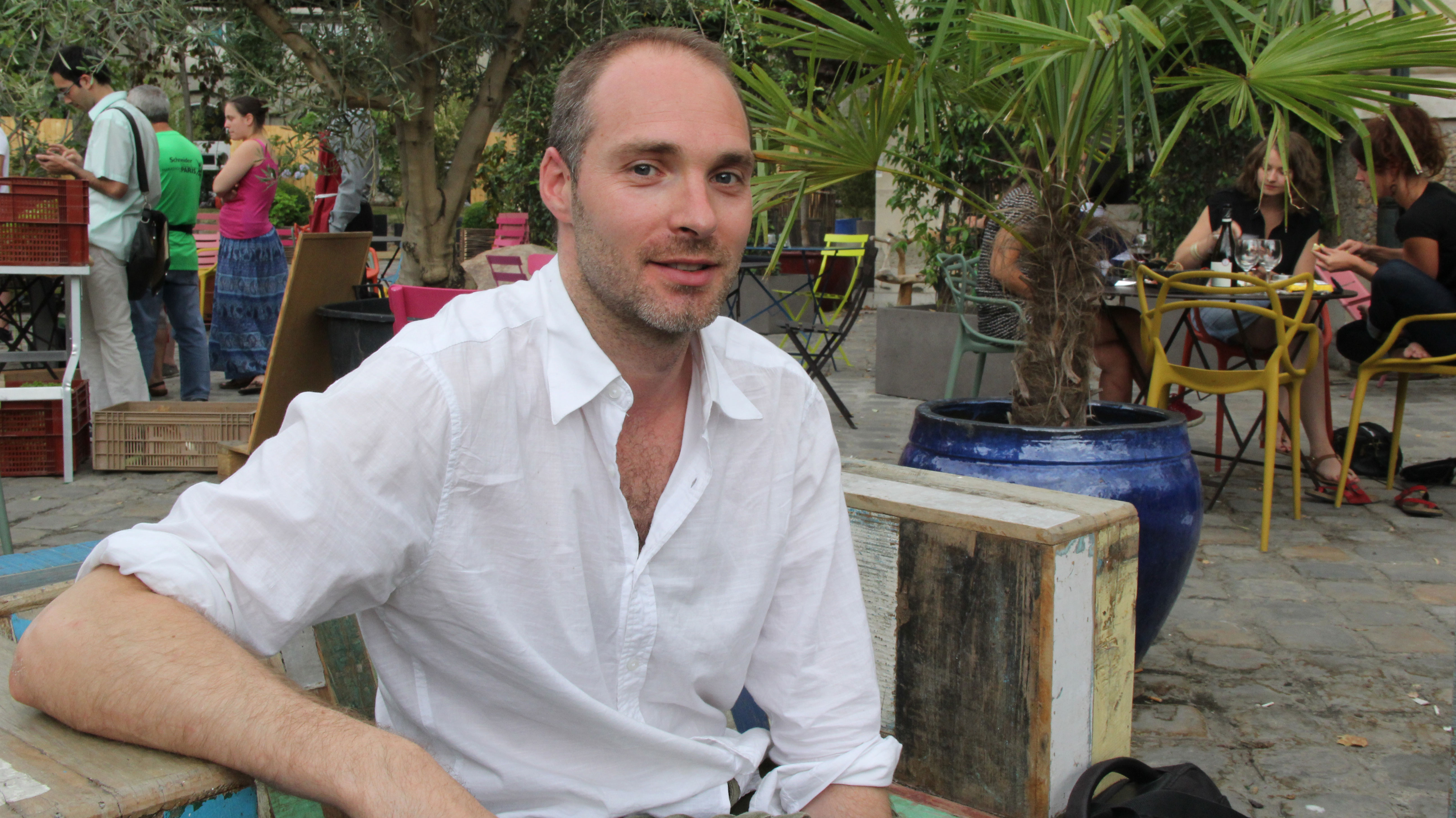 Parisian installation artist Baptiste Debombourg defies all predictability with his mind bending, three-dimensional pieces. He sheds architectural conventionality, and instead works with shapes and patterns in a way that is nourishing to the eye and baffling to the mind. While some artists play around with the idea of containing chaos, forcing an idea into a space, so that it can be examined easily, Debombourg prefers to take ordinary materials and create that chaos.

Debombourg recently collaborated with luxury brand Maison Martin Margiela to create a dynamic installation piece for the Grenelle store in Paris. The piece, appropriately named Turbo, is full of drama and impact. Following the success of Turbo, Debombourg teamed up with the luxury brand once again to create another installation piece, Stalker, which premiered at the Miami location, in time for Art Basel.

We sat down with Baptiste in Paris, and asked him to share with us his perspective on contemporary art, his growth as an artist and the correlation between art and science. His penchant for his art carries in every word he speaks; Debombourg is a brilliant thinker and his work is innovative. 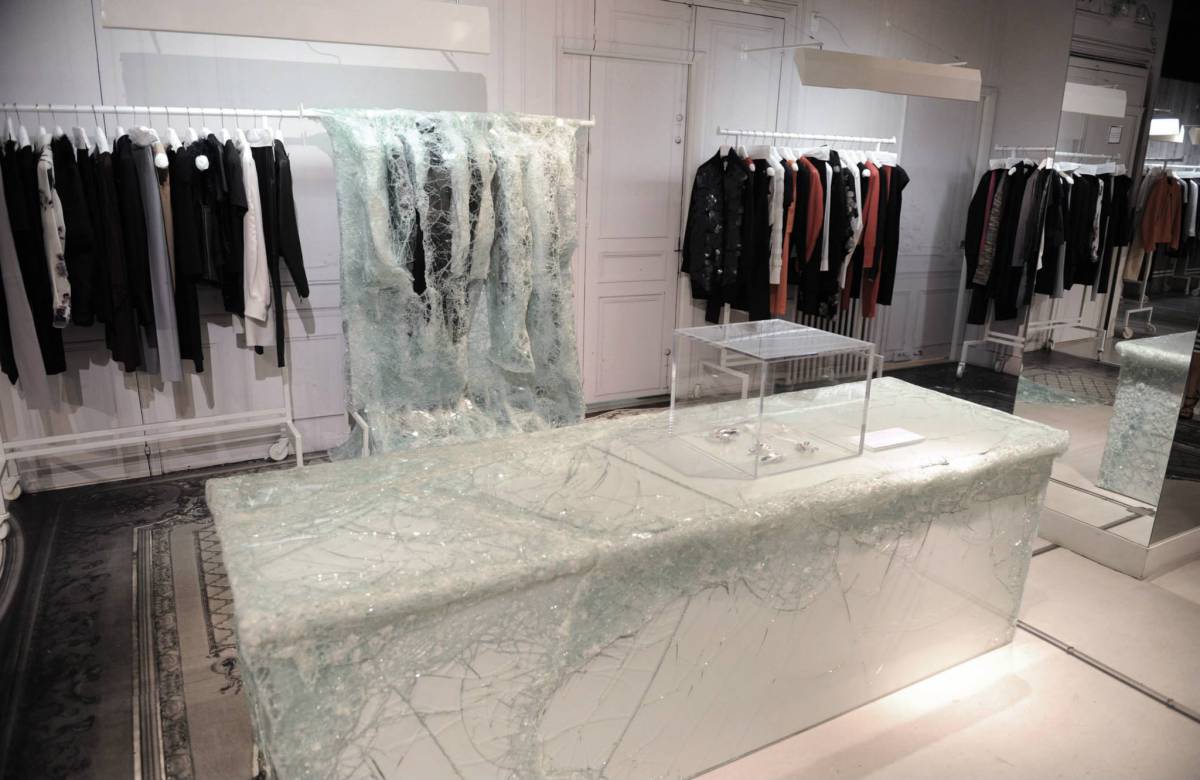 What influenced you to become an artist?

I was just curious about everything, and was trying to find the best way to understand things. I was very scared of becoming an artist, but chose the arts because it was the best way to have the freedom to find, to search and create projects. I was also asking myself about the question of ego because the ego is very bad for the arts. I thought a lot about this question, and finally, I chose the way of art because it allows the freedom to imagine everything you can do, and in our society, I think that’s very important, to have a way to imagine something and a way to think it would be possible to do it.

You work in temporary spaces, and your work is often three-dimensional, why have you chosen installation art as your medium?

This is the way that you touch the reality and exist more in the workspace in my point of view. I decided to create some work in sculpture and installation, because when you’re making an installation you don’t impose a work to everybody, it’s just a question of time. Installation is exciting, it can offer a surprise, last just long enough to disappear, then it exists only in the memory. The aim is to make sure the piece exists without me, I think this is the best way.  END_OF_DOCUMENT_TOKEN_TO_BE_REPLACED